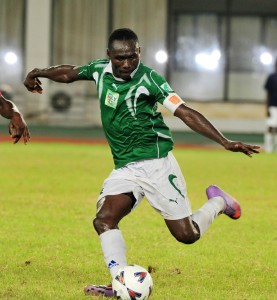 The Ghana Premier League took off this weekend with several interesting score lines across the eight league centers.

Seventeen goals were scored in the first week with only Wa All Stars and Accra Hearts of Oak recording away wins against a star-studded Medeama SC side and Berekum Arsenals respectively.

There were lots of highlights at the Baba Yara Stadium in Kumasi where newly-promoted Bechem United have adopted as their new found home.

Villislav Bogdanovic's men lost 2-3 to New Edubiase who were by far the better side on the day.

Bechem United midfielder Eric Fodjour was very impressive through-out Â the game as he provided and assists and capped it with a perfect goal from the spot.

New Edubiase skipper Mumuni Abubakar pulled the strings in midfield and created a lot of goal scoring chances for the Bekwai lads.

But it was young striker Emmanuel Baffoe who stole the show by scoring the first hat-trick including a 25 yarder free-kick to beat goalkeeper Ransford Cudjoe.

Aduana Stars took control of the game in the entire second half but goalkeeper Akwasi Acheampong stood between the Fire Boys and goal.

Defending champions Berekum Chelsea were less impressive as they were held by Tudu Mighty Jets at the Accra Sports Stadium.

Ex Asante Kotoko striker Frank Osei came from the bench to surprise the star studded blues with a classic goal before skipper Abdul Basit equalized for Steve Pollack's side.

Last season runner-up AshantiGold were also held by a well composed Dwarfs side at the Len Clay stadium in Obuasi.

Captain Bismark Asiedu took control of the midfield as he spread several defence splitting passes and finally got rewarded as he had a hand in the equalizer.

The return of Paa Kwesi Fabian to Kpando saw Heart of Lions inflict a painful 1-0 win over visiting Wassaman FC.

Hearts of Oak target Bright Nsiah showed what he is made of as he drove a 25 yard free-kick past goalkeeper Tetteh Boateng which stood as the only goal of the match.

Kumasi Asante Kotoko were left disappointed when they threw away a one goal lead to draw level with newly promoted Tema Youth.

Striker Ahmed Toure picked off from where he left off last season, scoring from a corner kick with a sublime header.

Teenager Baba Abdul Rahman looked composed on the left side of defence for the Porcupines, providing the assist for Ahmed Toure's goal before Hamza Abdullai equalized.

Wa All Stars sent Medeama SC packing at the Essipong Stadium with a 2-1 win.

Defenders Joshua Otoo and Adnan Saeed scored for the Upper West side before Louis Agyeman pulled one back.

All Stars central defender Tijani Joshua was always at the right place to deny the sharp attackers of Medeama any chance of coming into the game.