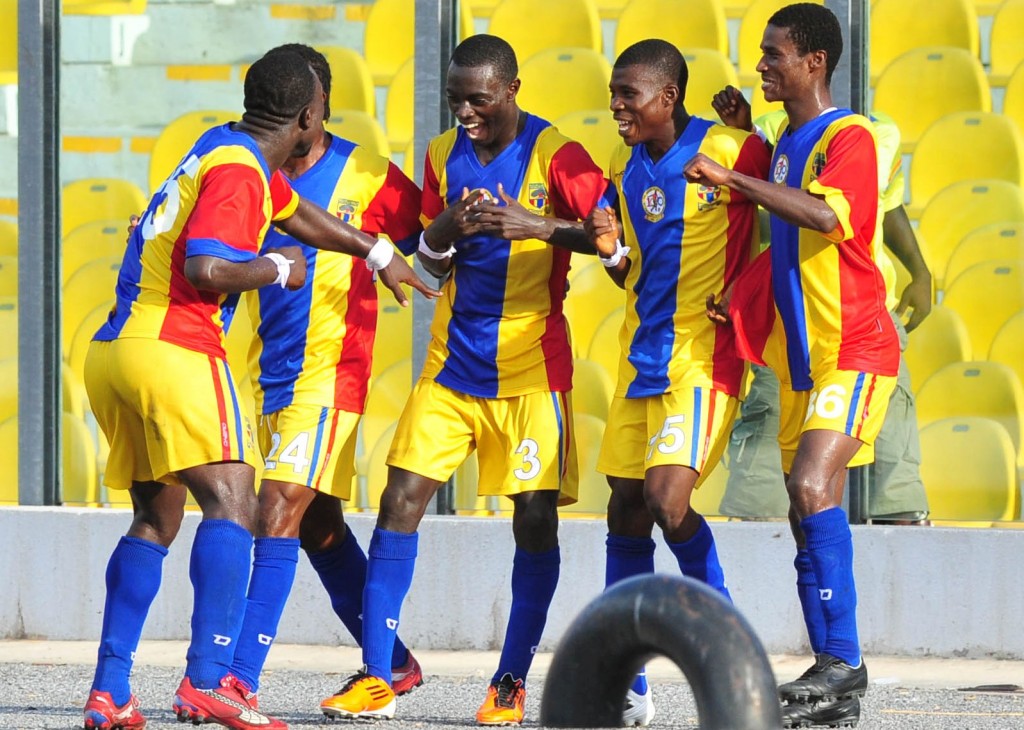 Seventeen goals were recorded for the second week in the Ghana Premier league as the giants seemed to have resuscitated from their first week slumps.

GHANAsoccernet's Saddick Adams picks his top performers from the weekend's actions in the Premier league.

Champions Berekum Chelsea hosted Liberty Professionals on Saturday at the Golden City park in Berekum and needed an injury time header from substitute Yaw Alexander to bag all three points after a shock opener from the guests through Fuseini Zuberu.

Liberty skipper Michael Helegbe led by example dictating play in midfield and setting up Zuberu on the 39th minute.

He looked comfortable all day and nearly snatched a point before goalie Akwasi Acheampongâ€™s howler.

Debutants Bechem United suffered yet another defeat at the Cape Coast stadium to Ebusua dwarfs.

The match could have recorded a cricket scoreline but for the experience of Bechem United goalkeeper Ransford Cudjoe who pulled several saves to trim down the scores.

Had little to do about Seidu Bancey's brace all from the spot.

Wassaman FC recorded their first victory by beating Berekum Arsenals 2-1 at the Essipong stadium but it was the visitors who looked more threatening in front of goal.

Arsenal defender Akwasi Acheampong was top of match as he tamed the homesters frontline very well.

In form Wa All Stars pipped visiting Tema Youth by a lone goal.

Striker Sarfo Gyamfi rose from a villain to hero after wasting an early spot kick to score the winner.

Enterprising full back Godfred Saka was the danger man in the game taking charge of all dead ball situations and set up onrushing Emmanuel Akuoko with a curling freekick from 30 yards.

Edubiase FC maintained their position on the top of the league log with a deserved 1-0 win over a lackluster Heart Of Lions side.

In-form striker Emmanuel Baffoe pestered the Lions defence all day and eventually got rewarded with a goal to increase his tally to 4 goals.

Accra Hearts Of Oak bagged the necessary 3 points against a stubborn ten-man Mighty Jets at the Accra Sports Stadium.

The Phobians went ahead early in the game after Douglas Nkrumah converted a spot kick before Uriah Asante tapped in from a rebound.

Uriah Asante was the livewire for the giants and was at the receiving end of several crunchy tackles from the Jets defence particularly Hassan Mohammed who got red-carded for one of such tackles.

Jets center back Inusah Musah made a mince meet of striker Mahatma Otoo.

It was an electrifying atmosphere in the weekend's top liner at the Baba Yara stadium as Kumasi Asante Kotoko put up a classy performance to thump regional rivals AshantiGold by three goals to nil.

Coach Maxwell Konadu'sÂ  total football concept paid off as combative midfielder Yahya Mohammed won just and about everything in and around the midfield.

He sprayed the ball in around the pitch and threatened goalie Fatawu Dauda on a couple of occasions with thunderous set pieces.

Set up Daniel Nii Adjei with an incisive pass before the latter was brought down in the penalty box.

Kotoko seems to have finally found a solution to their perennial left back problem in teenager Baba Rahman who yet again played comfortably in just his second league game taming Henry Traore on the left flanks of the miners.

Striker Ahmed Toure was his usual best testing Ashgold goalie Fatawu Dauda on every given occasion and selflessly set up Nathaniel Asamoah for the second goal.

The latter seems to have regained his confidence under new coach Maxwell Konadu with whom he came into the limelight at Wa All Stars.