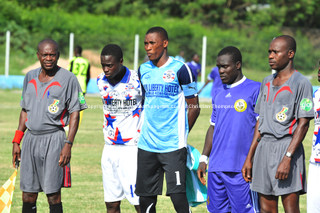 Another sizzling weekend in the Ghana Premier League as the Asante Kotoko and Hearts of Oak preserved their positions at the top whiles Mega spenders Medeama SC.

The Mauve and Yellows surged on the log with an impressive 1-0 against defending Champions Berekum Chelsea at the Golden City Park.

At the bottom of the table, it was the same old story for Berekum Arsenal, Tema Youth an beleaguered Bechem United the latter still without a point after 4 matches.

There were some impressive individual performances so here are my choices.

GHANAsoccernet picks the top performers after the weekend matches.

Fantastic display by the Ghana Olympic team captain. His saves provided the Soccer lads with the precious 3 points at the Sly Tetteh Park in Dansoman. Was the main pillar between Liberty and the Tema Youth attack who fired from all angles especially in the second half. Agyei capped his performance by bravery scoring a penalty to bag all that was need in the game.

The enterprising defender was full of life as he again proved the main man for Aduana Stars. His free-kick thundered through the AshantiGold wall in a manner that has become very peculiar to him. Saka also defended brilliantly throughout.

He seems to be forming a formidable partnership at the back with the bulky Osei Bonsu and was very outstanding against Wassaman.

This time, the tall lanky defender surged forward on any given occasion and tested the hosts goalkeeper with two powerful headers in each half. Cleared his lines very well and covered a lot of area by standing in for his full-backs when they overlap.

The stout defender kept his lines very well at the back and ensured the miners took a precious point from the Agyeman Badu Park. Took control and organised his defence to keep the Aduana Stars attackers at bay as he made several timely interceptions, two of them in the last 10 minutes.

The lively left back was exceptional at the back especially against an attacking Chelsea side at the Golden City Park. Surged forward and curled in a lot of crosses with his powerful left foot and earned a couple of infringements with his lightening speed proving too difficult for the Chelsea defence.

The Ghana U-17 skipper was the livewire of the home side and did what was suppose to be the preserve of influential captain Bismark Asiedu.

He scored a delightful goal that stood as the winner. Could have scored a lot more had he been playing deep enough.

The former RTU manâ€™s link up play with team-mates Hans Koufie and Luis Agyeman in the second half was sensational.

Atia had the better of established names in the midfield like Abdul Basit and Gladson Awako. He spent more time in the opposition area than his own in the second half and came back solidly to defend when he is called upon. No wonder he won the man of the match.

If Wa All Stars are hopeful of making an impact this season, then they are going to have to rely on Salifuâ€™s wonderful craftsmanship. Was quiet exceptional last week against AshGold in Obuasi and proved again why coach NurudeenÂ  Ahmed should select him. The youngster is gradually becoming the main figure in midfield for the Upper West side just in his debut season as he spread play in a manner Bechem United found very unfriendly to compete. Set up several goal scoring chances as well including the second by Godfred Gyasi.

The experience striker was very instrumental in the sideâ€™s victory at Berekum. Â Linked up with compatriot Hans Coffie very well and it was in one of their numerous brilliant exchanges in attack from which he had a solo run, dribbled past Ahmed Adams before scoring a master class that proved to be the winner.

The Ivorian has never had a bad day this season. His figure is always a threat in every game and this was wasnâ€™t an exception. Took on the Lions defence on every given occasion and scored a very brilliant header, his 4th in the league this season.

The young attacker is in the form of his life. Edubiase is now all about Baffour who is gradually establishing himself as a potent attacker in the league. Cant be left out of any grounds with 5 goals in 4 games. Donâ€™t forget he scored the winner against Jets.