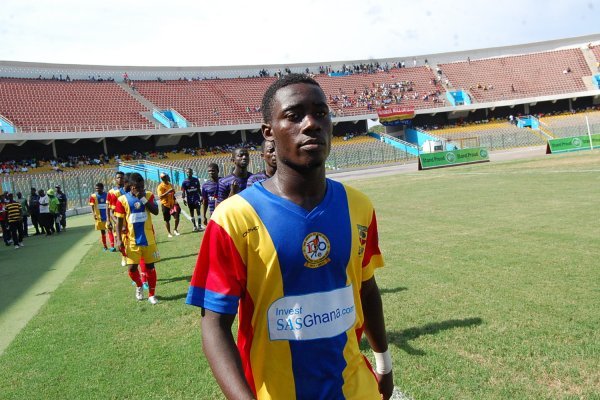 It proved to be another exciting and pulsating midweek of Ghana Premier League football.

Hearts of Oak put up a spirited performance to defeat Hasaacas 2-1 in Accra but the stand-out result was at the Dormaa Park where congratulations must go to Miroslav Bogdanovic's Bechem United who came from a goal down to beat Aduana Stars 2-1 at home.

Bechem becomes only the fourth club to win at Dormaa in five years.

Heart of Lions picked up their first away victory whiles Medeama were booed off the pitch at Tarkwa as the Mauves are surprisingly without a win this season.

GHANAsoccernetâ€™s Saddick Adams picks up the star performers of the midweek and put them together as the team of the week. Take a read.

Robert Dabuo is yet to concede a goal in 360 minutes of premier league football and that is why the Miners are yet to lose a game as well.

Ashgold might have won only two top-flight games this season but I can guarantee Dabuo has been at the heart of those victories.

His second-half save to deny Faisal's Sule Mohammed and a string of dying minute saves were vital moments in their 0-0 draw.

The match was not a classic one but the result could prove vital if the Elephants are to stay in contention this season.

There was so much about Bechem's performance against Aduana that was so positive - Tophic Sani upfront and Noah Martey in midfield, just to mention two.

However, Patrick Opoku's desire and leadership at the heart of their defence was examplary.

This is a player who is keeping former Kotoko full back Godfred Ofosu out of the team, and on this showing justifiably so.

They've had Godfred Yeboah, Osei Kwame Junior, Baba Rahman and Joseph Ochaya, but this lad will add up soon.

He's even gotten rare quality, he can score as well. If you're a defender and want to join in the attacks you need to have the quality of passing to do it.

He has been good all matches and against Wa All Stars even better.

I did ask myself what a full-back was doing so far up the pitch in open play as Donkor weaved past tackles before dispatching a superb shot past All Star's Richard Ofori to notch his first goal for the club.

Stephen Aidoo looked impressive again at the Robert Mensah stadium. My match reporter tells me this Dwarfs skipper is good enough to be in the Black Stars team, perhaps, his leadership acumen on the pitch speaks it.

The Dwarfs defender's tackle on Nana Poku in the dying minutes of the first half against Berekum FC was the difference between three points and none for the Mysterious side.

You might be shaking your head with Egyiri's inclusion in my team of the week for the second week running.

Wait until you answer this. When was the last time a center-back led the goal race with three goals and an assist in his opening four matches?

The answer is the guy up here. The Kpando side did beat Medeama at Tarkwa and it was Egyiri's powerful header that ensured it. Excellent in defence too.

All I can say is "what a goal!" Against Amidaus, Joseph Mensah produced the sort of strike that every footballer dreams of.

His chip over Eric Ofori-Antwi from outside the penalty box can contend for the goal of the season am told.

That Liberty equaliser put the game well and truly beyond Amidaus and rapidly injected discontent into the home support.

The Dansoman-based side dont fight for trophies nor survival. They just keep unearthing talents like this.

If you look at the week he's had, you might offer a medal for that. Just few days ago we saw Cobbina put Inter Allies to the sword.

In midweek it was Kobbina Amissah's Hasaacas who felt the cutting edge of the Phobian midfield maestro.

His superb free kick that beat George Owu was the one that beat a stubborn Hasmal too.

Former Tudu Mighty Jets skipper Winfred Dormon tells me if he had an opportunity to meet this guy, he'll just tell him to keep his head down and rather his performance up.

They said you needed to be at Dormaa to see how it was done. But you just need Dwamena to ask what entered him at the Agyeman Badu Park on Wednesday.

This lad is the third player from his club to appear in my team of the week this season and I think its their sheer desire and hunger.

He kept wreaking havoc on the field against Aduana. The longer the game went on, the more Dwamena turned the screw.

Aduana simply couldn't handle him and when he finally popped up in the penalty area and put the ball behind Stephen Adams with a toe poke, it was all over.

There was no doubt about it.

This player has been used as an attacker before but Lion's 4-2-3-1 system against Medeama seemed to suit Kwadwo Poku extremely well.

He looked very comfortable alongside Konney Idan and Edmund Owusu- Ansah, both of whom were responsible for Lion's impressive counter-attacks which ultimately ripped Medeama to shreds. Simply, he run the show in Tarkwa.

It's been a long time coming but Attobrah once again looks something like the player we knew when he first burst on to the scene. Full of inventiveness and ingenuity. Edubiase needed a magic win to kick start their season and there there was only one man who could conjure it best.

What a shame - two magnificent strikes and an all round performance by the the Dwarfs striker but no headlines and all because of the absence of television coverage.

Under normal circumstances I would have gone for Richard Gaizah but Attukwei's touch and control to bring down a superb ball over his shoulder, resulted in Dwarf's second goal and was the moment of the match.

His opening goal was also a classy finish with a touch of good fortune but all strikers need a little luck every now and then.

When this club lost Bismark Asiedu and Seidu Bancey, I never thought they would get a replacement but they soon have.