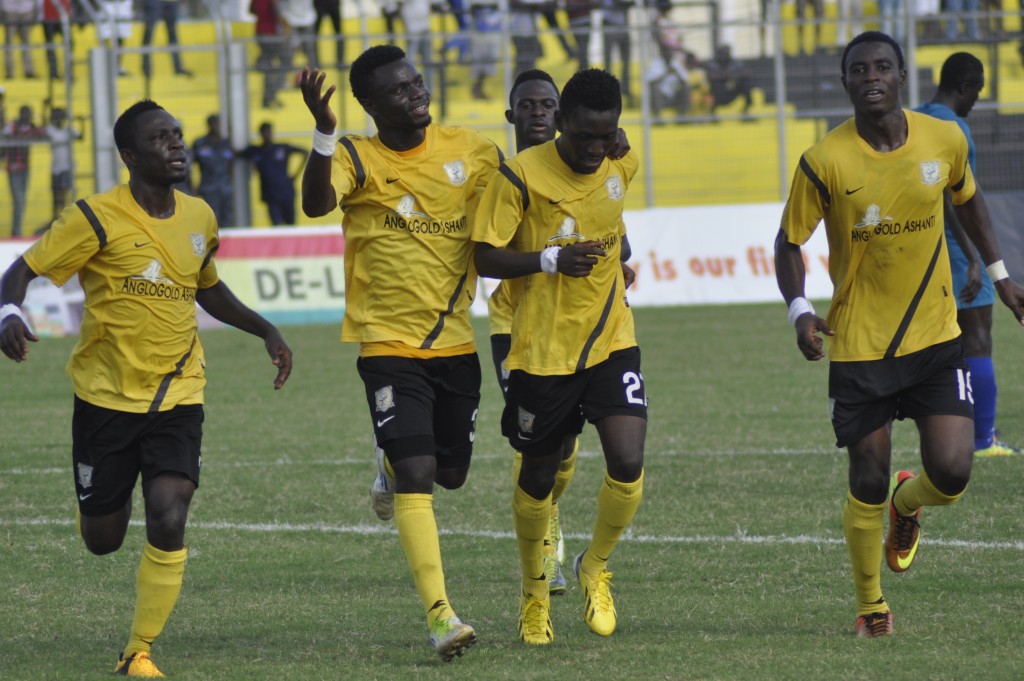 King Faisal produced the sort of performance required to keep them safe in the top flight as they beat visiting Wa All Stars 3-2 to bag their first three points of the season.

Heart of Lions and AshGold put Dwarfs and Amidaus to the sword respectively.

GHANAsoccernet's SADDICK ADAMS picks the top Performers in the week 5 fixtures and put them together as his 'Team Of The Week' (TOTW).

I was tempted to select Asante Kotoko's Isaac Amoako after he kept a clean sheet against Inter Allies, but having seen Eric Antwi's two saves from Francis Agyei and Joseph Ato Bissah in Ashgold's 2-1 win over Amidaus, I had little choice but to select the Ghana U20 World Cup goalie in my Team of the Week.

He is on record to have made nine crucial saves in the game which earned him the Man of the match award.

Had it not been this lad, Amidaus would have left the Len Clay at the receiving end of an avalanche scoreline.

Andoh is another talented youngster that David Duncan has crafted and brought off the Hearts conveyor belt.

Hearts Of Oak's 1-0 win against Bechem marked their first clean sheet in four league games and in an excellent performance from the Phobia back four, Andoh looked exceptional.

What I noticed was that, this guy is also efficient in midfield as David Duncan pushed him into the middle when Moro Abubabkar was taken off.

It was an inspired performance by Yusif Abubakar's side against Dwarfs at Kpandu,Â  as the Lions secured a 1-0 victory to continue their unbeaten run.

TOTW reporter at the venue couldn't have summed it better when he said: "Lions skipper Asiama put Amidaus attackers Daniel Gozah and Daniel Awuni out of the game."

The former Krofrom FC defender appear in y team of the week for the first time simply by dint of his hard work.

For the second this season, I've selected Lawrence Lartey for my Team of the Week after another sound performance, this time against Amidaus Professionals.

However, if he continues to play alongside Awudu Nafiu at centre-back and does not move anytime soon outside the country, Ashgold will compete for a trophy in the end.

This was a massive fixture for Aduana Stars and one they had to at least gain a point. Alongside Emmanuel Akouku, the bulky duo mounted a barricade at the Berekum Golden City Park for most parts of the game against Chelsea and until Bennett Ofori's equaliser late on, Aduana would have three valuable points. Solid defending from the former Ashgold man.

For the second consecutive week Atobrah makes my team.He had a super game against Inter Allies in midweek and was just as influential in the 1-1 draw against Hasaacas at Essipong.

The youngster can handle the ball in the same way he handles the pressure and his performances are capable of keeping the Bekwai-based side safe in the top flight.

His brillant through ball that Bernard Ofori nodded home for the side's goal was just superp.

I dont know who scoted this chap for the Miners but you've got to see him before you know the kind of gem they have secured into their fold.

The more Morrison plays, the more I tend to like him. There are elements of his game that remind me of Bernard Don Bortey.

He is small and compact but fearless and handles the ball with a certain confidence and style. Against Amidaus, infront of the home fans, he run the show.

In his native Berekum, the fans affectionately call him the 'Berekum Ronaldo' comparing him with Real Madrid star Cristiano.

This was one of the best performances I've seen from the 21 year old since he joined from cross-city rivals Berekum Arsenal.

To have been selected by Tony Lokko for such a high-profile fixture says everything you need to know about how Chelsea regard this lad.

On his debut league appearance, he made it count. His goal against Aduana was just a reward for his efforts and it seems Chelsea have bought a real gem.

From the start season kickoff, everything has been going wrong for the Mauve and Yellows, except Godbless Asamoah.

For a player who has spent most of his football career in the lower leagues, he looks every bit the Premier League striker every time he takes to the field.

It is not surprising he has scored more goals on the road than at home. His technique and vision proved worth as he punished the sloppy Libert defence on Sunday.

What most of the premier league defenders must note is that, this lad does not need a second invitation to score.

Whatever you think of Yahaya Mohammed, you can be sure that controversies and the headlines don't bother him the least.

He never stopped running and was always a threat to the Inter Allies defence.

It was obvious Kotoko did struggle to keep themselves calm on the slippery AstroTurf but Yahaya's familiarity with the ground having played for Amidaus last season proved a turning point in the game.

Opened his goal accountÂ  at a time when the game was heading for a draw. Donâ€™t forget he's been deployed as a striker in the absence of Seidu Bancey, and he has lived the bill.

Only one King Faisal player had made my team this season and if anyone was going to appear again, it surely was going to be this guy.

He made Wa All Stars pay as early as the fourth minute for their sheer lack of defensive professionalism.

As if that wasn't lesson enough, the Blues provided Faisal with a last-minute opportunity and the stage for the silky attacker to finish the job and grab all three points.

King Faisal had not scored a single goal going into this game but they did start in folds. Sule bagged the first hat-trick of the new premier league season.