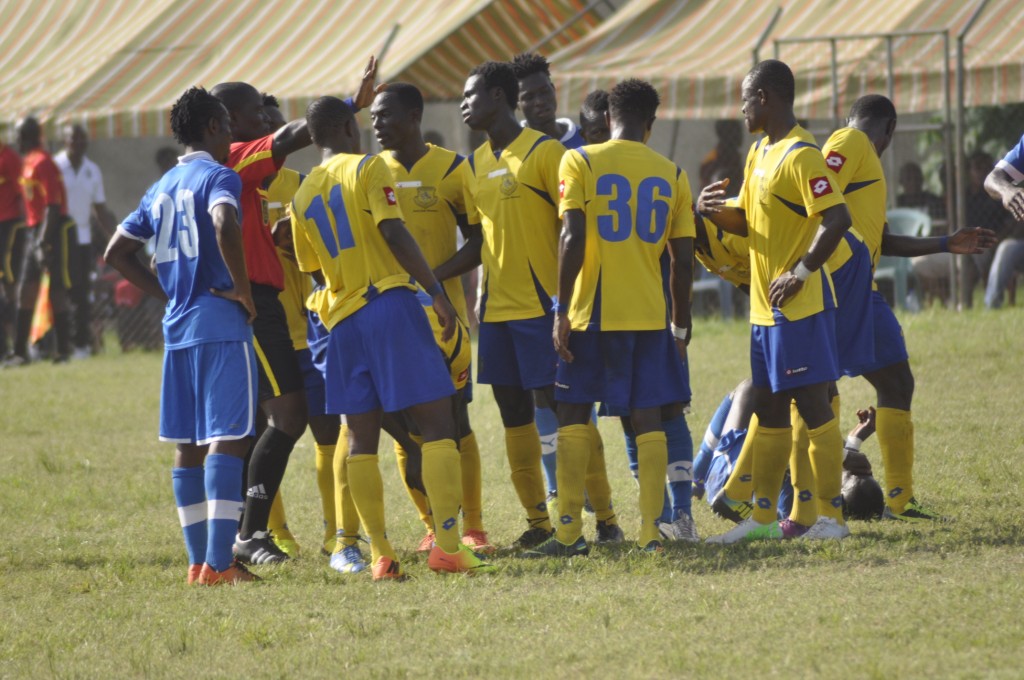 New Edubiase United against Heart of Lions in Bekwai.
Share

Though Asante Kotoko and Hearts of Oak got back to winning ways, the Premier League still produced a shock result in midweek.

Bottom placed Inter Allies finally killed the giant killers. This time it was Bechem United on the wrong end, going down 3-0 away to Allies.

There were other home win as Dwarfs and Wa All Stars all collected maximum points against King Faisal and Hasaacas respectively.

GHANAsoccernet.com's SADDICK ADAMS picks the individual performers of the midweeks and puts them together as his team of the week. Take a look and see if you agree.

Goldfields had Nibombe Wake and Hearts of Oak had Sammy Adjei. Both keepers provided their teams with championships.

Isaac Amoako has produced another important display on the big stage, this time against Chelsea, and in this form he can be the difference between Kotoko boss Didid Dramani winning and losing the Premier League title.

He is the current best keeper in the Ghanaian top flight by a mile.

It was one of the most desperate games you'll see so far this season but Inter Allies still gained all the valuable points, their first this season and their first clean sheet in the top flight against Bechem.

What a game this kid had against?Hearts?and he was still on the losing side.

After watching him mesmerize the Hearts of Oak defence for almost the entire parts of the game, there is no doubt that this lad can play.

Looked composed in defence and dangerous in attack in every Liberty move.

What a pity the Dansoman-based side could not start the game on the same note they progressed as it moved on.

My colleague tells me many of the fans at the Stadium had more praises for the new Kwadwo Asamoah in the making than the victors.

Nuru Pepe as he is affectionately called was rock solid in defence for the Phobians but his incursions into the Liberty area on many occasion drew applause from the cheering fans.

The warrior is back for Accra Hearts. Liberty's threat increased considerably when striker Mawuli Francis came on and started to link up nicely with?Michael Appiah?to add to Alfred Nelson's aerial prowess on set plays.

Hearts needed?Nuru Sulley?to see off the danger. He lasted 90 minutes in the win over?Liberty but he is vital for his side's run-in and is getting stronger by the game.

This player is producing performances of such a consistent standard it is starting to sound boring.

For the third time this season the Ghana U-20 star makes my team of the week and for precisely the same reasons as the three other occasions.

Positioned himself brilliantly in the heart of the defence, frequently getting into the right place to help clear away the danger when Aduana got the ball into the box. Made a decent block on a Daniel Darkwa effort in the first half to prevent a second goal.

Makes my team of the week for the second time this season, which suggests the first time wasn't a fluke.

His overall contribution to Hearts of Oak clean sheet against a highly spirited Liberty was particularly impressive.

I must admit he did have a tremendous supporting cast.?Ruben Gnagne?looked much more comfortable than of late while Stephen Tetheh?and?Nuru Sulley literally breezed through the game.

The more I see Atobrah, the more I like him. There are elements of his game that remind me of the late Shamo Quaye.

He is small and compact but fearless and handles the ball with a certain confidence and style.

He always works hard and is never afraid to get involved. He was at the heart of the majority of Edubiase attacks against Lions , and got the reward for his efforts with a lovely little toe poke in the first half for anxious looking manager Anthoney Commey.

Kotoko coach Didi Dramani told me last season that once Prince Baffoe realised the sort of potential he has and starts to perform, the Porcupines would start winning matches.

OK, he didn't put it quite like that but those were his sentiments and he is spot on after the midfielder's performance in the victory over Chelsea.

The former Nania FC playmaker was one of the few brightest spots on the field in the cagey game at the Baba Yara.

Once again, he proved to be the driving force in a Chelsea performance full of enthusiasm. I wonder whether he can get his team-mates to perform with the same belief at Baba Yara.

In a team full of flair, he allows Abdul Basit,Yaw Alexander and Obed Owusu the freedom to express themselves.

When Jackson is in this form his team-mates should give him their bonus money for doing all their defensive work.

He confidently elected himself and slotted home his sideâ€™s penalty. Sad the player lost.

Coach Herbet Addoâ€™s?4-2-3-1 system against?Bechem seemed to suit?Propser Kassum?extremely well. He looked very comfortable alongside Gordon Ahortor and Frederick Agyeman, both of whom were responsible for Inter Allies?impressive counter-attacks which ultimately to shreds.

Prosper had appeared in my team on two seperate occassion and he as well has been the architect of this side who were doing so well even in the losing runs.

Osei threatened to hurt?Aduana earlier in the game, but they didn't heed the warnings and it was clear he wasn't going to miss the target a second time in the 1-1 draw at Dormaa.

Bashiru Hayford spoke with glowing praise?during the post match interview?about this player's performance for Ashgold in the 3-1 win against Dwarfs during the weekend.

The former Asokwa Deportivo striker continued his fine form with a heartbreaking equalizer against Aduana on the stroke of full time.

No so suprising the home fans cheered the Ashgold team as the made way to Obuasi.?Surely a?replacement for Yakubu Mohammed in the making.