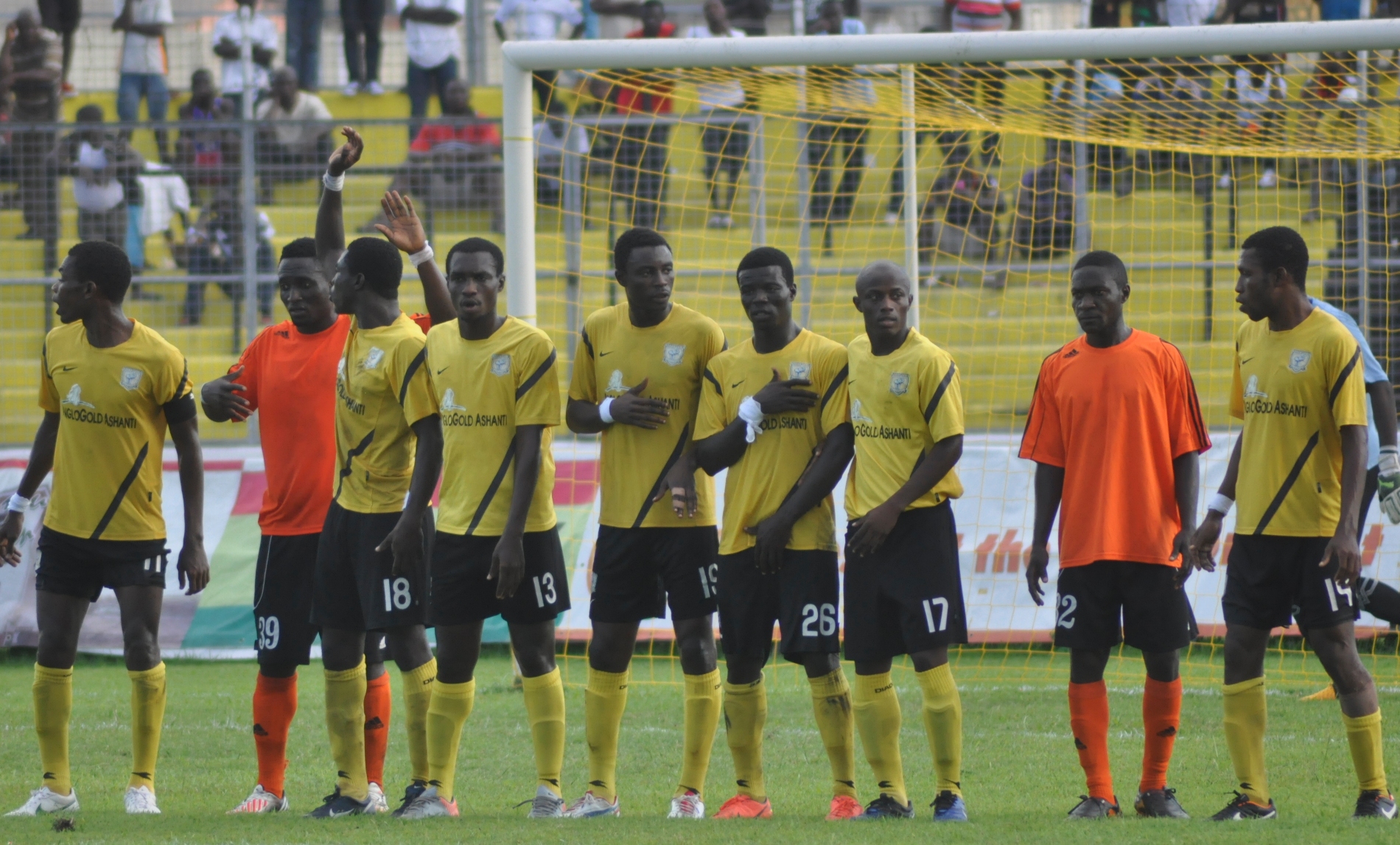 It was another exciting weekend in the Premier League, with Hearts Of Oak closing the gap on Asante Kotoko by taking all three points away at Tema against Amidaus.

AshantiGold recovered from last week's defeat at the Bekwai to demolish an ineffective Asante Kotoko while Dwarfs lost to Wa AllÂ  Stars and Lions at home to Hasaacas.

GHANAsoccernet's SADDICK ADAMS Picks the star performers of the weekend and puts them together as the Team of The Week.

I don't really know what is it with Hasaacas after the departure of coach Kobbina Amissah.

It seems Yusif Basigri has conjured some magic which is really turning around their seemingly dwindling season into shape.

Coach Basigri told me after the game: "Its so difficult winning away especially at Kpandu but I got saved, the whole back five did extremely well but one man stood out and that was Owu."

The experienced goalkeeper used everything at his disposal to deny Lions a share of the spoils. Great performance.

I expect Owusu Bempah to stop the other team from scoring, not to be scoring the winner. What was he doing up there in open play so early in the game?

He saw off Emmanuel Ofori en route to Amidaus's penalty box only to finish like a seasoned striker with a fine header past Eric Ofori Antwi in post.

When a defender gets that confidence to score a goal away from home and then keeps his opposing attackers at bay in a game, he deserves a place here.

The pre-match chaos that had surrounded the Phobians seems to have died now all because of Bempah's winner.

I had to see it to believe it. Never have I seen this season such a complete performance by a club like how Ashgold id against the league leaders.

The build up from the defence to the attack was extraordinary. Augustine run his heart out throughout the game and pocketed the slippery Seidu Bancey all day.

On how he made the run into the Kotoko area make three shots tells what a day he got.

He penalty appeal which was turned down by referee Charles Nii Tagoe was so clear, but the free kick awarded resulted in the second goal.

For the second week, I've selected Pius Baffour for my Team of the Week after another sound performance, this time against Edubiase.

His partnership with Ransford Kwakye is simply outstanding. Carved in John Boye's stature and spottingÂ  similar hairstyle with the Rennes defender, Puis is such tough.

We normally associate good defending with sophisticated handling of the ball in defence but the former Mobile Front player was just phenomenal at getting his body in the way in order to stop New Edubiase getting shots in on goal.

Medeama fans have replaced the frown with a smile and the pregnant pauses with praise for this talisman.

Malik Akowuah was simply outstanding. The former Ashgold man was too quick and just too good in every department.

There was an uncanny resemblance to Patrick Viera's game about his performance against Aduana.

He virtually run the show at the T&A.

I've seen this player perform heroics for Inter Allies this season and I think the Tema based club would struggle to keep hold of such talent in the transfer window.

Forget about the position of his club on the table but this prodigy has carried the team single-handedly on his shoulders for almost all the matches they've played.

Kassim's mesmerizing passes, the zig zag runs and vision was what Liberty Professional couldn't deal with and thus had to finally succumb to the bottom club.

The winger was persona non grata under Han Van Der Pliujm but, under new manager Tonny Loko, he now seem to know what precisely is required from a player of his caliber.

That is why I was so upset when he was needlessly given the marching orders in the game against Aduana.

He could have pushed Chelsea upwards with the performance shown against Bechem.

Ato Bisah showed a great sense of vision, awareness and intelligence throughout the game. This lad has been promising a performance like this for ages.

We know he has the talent but Ashgold was the only club prepared to invest in it and now they are getting the reward.

He's has been Ashgold great team player by far this season and he capped it with a near perfect performance against Asante Kotoko.

Ato-Bissah was adjudged the Most Valuable Player in the game by the technical team.

First of all, I didn't see a victory forÂ  Wa All Stars coming at Cape Coast. Much also, I never thought of the former BA Stars diminutive midfielder even getting a starting place in the team.

Adams' greatest asset is his pace and with that he used incredibly in the game. Sam Adams threatened to hurt Dwarfs earlier in the game, but they didn't heed the warnings and it was clear he wasn't going to miss the target a second time in the 1-0 win.

This young man was a prodigious talent as an 18-year-old at BA Stars and he looks like he may fulfill all his promise under the watchful eye of coach Nuru Ahmed.

Hasaacas forward Frederick Quayson was in my Team of the week until I saw theÂ  "Prince Boateng Show" against New Edubiase. The nimble footed striker missed a sitter, hit the post and scored a brace - talk about the emotions of a striker.

King Faisal is starting to look the daring side we new years back.

Nothing would give me greater pleasure than extolling the virtues of this giant of an attacker who has risen to fame soo quick at the Len Clay.

He maintains that he doesn't feel the pressure and just plays football to enjoy it. Well, it certainly looks that way.

Osei Carlos took his goal brilliantly in the win against Kotoko when he run unmarked to nod home the opener after just twelve minutes and should have even scored more.

When Ashgold finally let go of Yakubu Mohammed, I thought they wouldn't find a replacement.

Now here they get another bulky and clinical one in Osei.