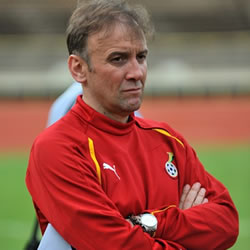 Ghana coach Goran Stevanovic has declared his preparedness to win next yearâ€™s Africa Cup of Nations with the Black Stars.

The Serbian trainer made this declaration during his squad announcement for the tournament in Gabon and Equatorial Guinea at a press conference on Thursday.

Stevanovic believes he has the right materials to deliver Ghanaâ€™s first African title in 30 years.

"I think we have excellent players to make a compact team," Stevanovic said.

"It is now up to us to do the rest so we can be champions..

Ghana will commence camping in Rustenburg in South Africa on January 7 where they play Kaizer Chiefs and South Africa in warm up games before the final 23-man squad is named.

The Black Stars will open their campaign on 24 January against Botswana before engaging Mali and Guinea in Franceville.