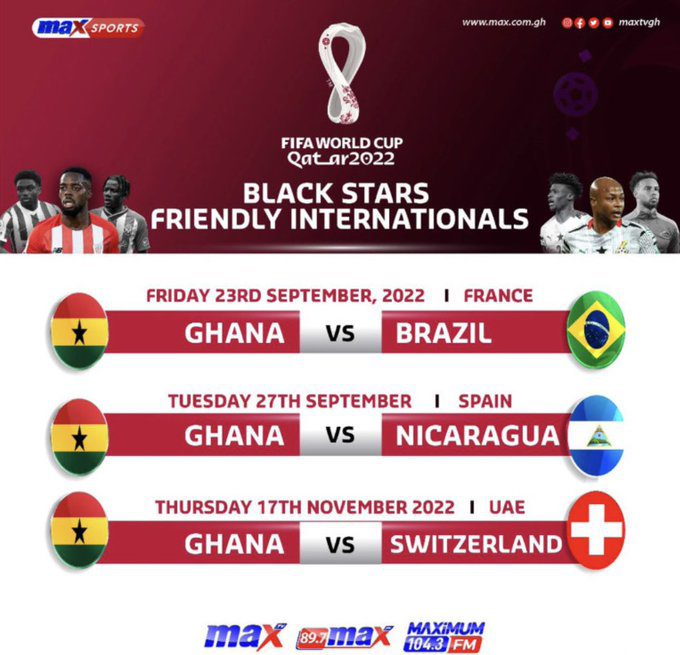 Ghana will be in action twice in this international break as part of their continued preparations for the upcoming 2022 FIFA World Cup.

The Black Stars will be taking to the field to play against two opponents that they will not come across all that often in international football, as they will clash against Brazil before taking on Nicaragua.

The game against Brazil will be a real tests as many will know that the Selecao are currently ranked as the No. 1 football nation in the FIFA rankings, while they are also considered to be the favorite to win the major tournament this winter. Indeed, there are a host of betting sites not on Gamstop that have already listed them as the favorite, too, with many providing them with short odds of achieving success in Qatar.

Ghana will take on the South Americans on Friday, September 23 at the Stade Oceane in Le Harve, France. The Black Stars will certainly get a workout from that game, and while there will not be too much importance on the result, there will be many that will want to see the team cope and remain competitive.

The match against Nicaragua will take place a few days later on Tuesday, September 27 at Estadio Francisco Artes Carrasco in Lorca, Spain; a game where the team will be expected to take victory and build momentum and confidence ahead of the 2022 FIFA World Cup.

What are Ghana’s chances of a successful World Cup?

While many will not necessarily be expecting the most triumphant of shocks from Ghana, the country’s nationals will want to see their team challenge the rest of the world and be as competitive as possible throughout the tournament.

Some will point to their efforts in South Africa in 2010 and will dream of seeing the side achieve the same kind of results they managed to achieve back then. However, their Group H draw would have perhaps needed to have been a little kinder to the Black Stars.

Indeed, the team are set to go up against Portugal, Uruguay, and South Korea in the first phase of the tournament in the Middle East this winter; a group that looks to be rather difficult on paper for the Africans.

The Portuguese and Urguyauans will be considered to be the favorites to progress and qualify from this stage of the competition by some distance, while South Korea are a nation that can typically contend with the best at the biggest tournaments.

Of course, football matches are not won on paper and anything can happen when the two teams take to the field. If Ghana can do well in the two upcoming friendlies, as well as be competitive against Switzerland ahead of the competition, then they might replicate what happened 12 years ago and shock the rest of the world with a successful 2022 FIFA World Cup campaign!

Regardless, Ghanaians all over the world are certainly looking forward to seeing the Black Stars in action!