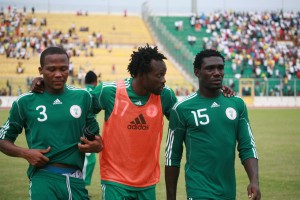 Ghana have slammed claims by Nigeria players that black magic â€˜jujuâ€™ was used by the Black Meteors to deny them a place at the All African Games.

The Black Meteors beat the Nigerians 2-0 in Kumasi to qualify for the tournament in Maputo after losing the away leg 3-1 in Benin City.

In the wake of their humiliating defeat in Kumasi , Nigeria captain Kingsley Udoh claimed that there was an object in their dressing room in Kumasi which points to the use of magical powers to win the game.

But the Ghanaian authorities have rubbished the claims by the Udoh insisting they refused to use a new dressing room after they had spotted fungi-infested left out food which had been left there inadvertently.

Spokesman of Ghana Football Association, GFA, Randy Abbey, stressed that Nigerians should not lay claim to charms as the reason for their loss but an issue of misinterpretation and incompetence.

"First of all, what happened was very very embarrassing to say. The thing is that somebody had eaten food in a take-way pack and left it in one of the lockers presumably the last time the stadium was used, and the cleaners in the stadium did not do work well enough by cleaning it, so, it attracted fungi. That was what the Nigerian team saw and was opposed to.

"It is just an issue of negligence in relation to who was supposed to clean the place and that of the stadium manager most especially for the fact that it is an international match.

"The most important thing is that, when the Nigerian team drew the attention of the match commissioner, the sports authority opened a third dressing room but the Nigerians refused. They insisted that they would use the corridor instead of the locker room that was clean.

"It was embarrassing for us as a country to make such kind of mistake. For me, I do not believe in charms (juju) to play football because if it works, all of us should know the country that would be winning the World Cup by now. I will find it a bit outrageous that people in this modern world would want to blame charms (juju) for their defeat," Abbey revealed.