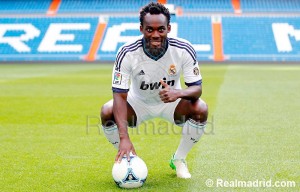 Ghana midfielder Michael Essien did not climb off the bench as Real Madrid suffered their second straight defeat on Saturday to fall eight points behind leaders Barcelona.

The on-loan Chelsea was hoping to make his debut for theÂ SpanishÂ giants after being named among the 18 players to play in the match.

But coach Jose Mourinho left the Ghanaian on the bench as a stunning early goal from Sevilla was enough to condemn Real Madrid to a 1-0 loss.

Piotr Trochowski lashed home after 69 seconds and Madrid could not find a response, instead counting themselves lucky that not one but two of their players avoided red cards that could easily have been shown.

Madrid had scored 12 goals combined in their last two visits to Estadio Ramon Sanchez Pizjuan, but only fleetingly threatened the goal here as they looked lost in their own uncertainties for long periods.

Iker Casillas made a mess of a fairly straightforward save to hand Alvaro Negredo a great chance after 40 seconds, the Spain goalkeeper recovering to concede a corner.

But it was from that corner that Trochowski broke free of Angel Di Maria and smashed an unstoppable half-volley high into the net.

It was thought Essien would be brought on shore up the Real Madrid midfield but Mourinho opted to keep him on the bench.

This means the Ghanaian is still chasing his Spanish top-flight debut since completing the loan move from Chelsea two weeks ago.