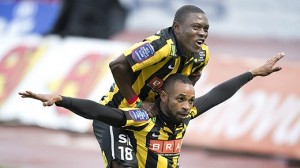 Waris will leave Russia for the top leagues of Europe

Ghana striker Abdul-Majeed Waris is set to leave the Russian top-flight for a move to one of the major leagues of Europe by next month to boost his fitness for the 2014 World Cup.

The 22-year-old, who plays for Russian giants Spartak Moscow, is expected to move to Holland or France when the winter transfer window opens.

Waris, a key striker for Ghana, has been unable to get enough playing time at Spartak Moscow which could affect his chances of staying fit the World Cup in Brazil.

The attacker says he will leave the club possibly on loan to help boost his Black Stars chances.

â€œI will move to (mainstream) Europe very soon so I just have to wait a little bit,â€ Majeed Waris said.

"I canâ€™t really promise anything concrete because I have been really good with Spartak and everyone likes me there so itâ€™s just something that I have to settle with them."

Waris joined the Russia league at the start of last season from Swedish side Hacken after an amazing season.

He was the top scorer and the best player in the Swedish league before he went to Russia.

He could only manage four appearances at Spartak and scored once.