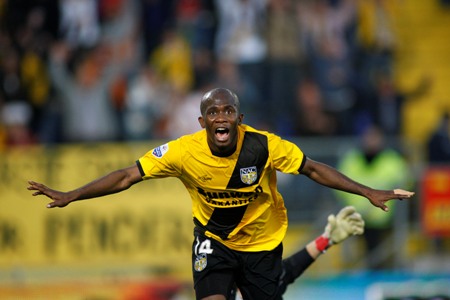 Ghana striker Matthew Amoah has signed a new three-year contract with Dutch side NAC Breda after protracted negotiations over the new deal.

The 29-year-old last month reached an agreement over his contractÂ extension but his agent Kees Ploegsma pulled the plug overÂ the dealÂ over terms ofÂ the deal.

But the Ghana international signed for three years to make him fully concentrate on the upcoming World Cup in Soutyh Africa next month.

â€œI have finally signed the new deal with NAC Breda for the next three years to keep my mind at ease before the World Cup,â€ Amoah told Ghanasoccernet.com.

â€œI have to fully concentrate on the World Cup as I donâ€™t want to go to the camp with any lingering doubts.

â€œThe terms I have agreed are favourable to me and NAC Breda have also been very goiod to me so I have decided to stay.â€

The major term of theÂ contractÂ is that NAC Breda will allow the striker to leave the club for a lowerÂ transferÂ fee if he gets a bigger offer after theÂ World Cup.

Amoah has played for NAC Breda since 2007.

He has earlier played for Borussia Dortmund, Vitesse Arnhem and Fortuna Sittard.