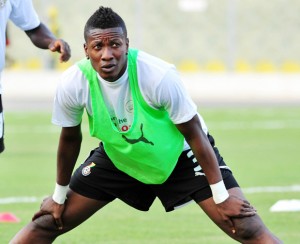 Sunderland coach Martin O'Neil has hinted that striker Asamoah Gyan does not want to return to the English Premier League side.

The Ghana international was a record signing at the Stadium of Light but is currently on a season-long loan with United Emirates side Al-Ain.

That deal was made in September while Steve Bruce was in charge of the Black Cats.

But even though Gyan was linked to a return to Wearside in January and has two years left on his deal, Oâ€™Neill admits the 26-year-old might have played his last game in the red and white.

The Sunderland manager said: â€œThe situation is, I believe it was a year-long loan for a start for which they had to pay us some money of the transfer fee which we paid in the first place, and that is still in existence.

â€œThere was some talk between all parties in January that didnâ€™t come to anything. I wasnâ€™t party to those conversations, although I was kept informed of them, of course.

â€œI think it will be the end of the season before I can assess anything.

â€œThere has to be a willingness on behalf of all parties as well. You wouldnâ€™t really want somebody who is really unwilling to come back to the football club, if thatâ€™s the case.

â€œItâ€™s unfair of me to say that because it might not be the case, but it seems to be the message thatâ€™s coming across.â€

Whether Gyan returns or not, Sunderland are likely to be in the market for a new striker again this summer with the future of on-loan Nicklas Bentner still uncertain and Fraizer Campbell struggling with injury.

Nevertheless, Oâ€™Neill insists he is yet to speak to owner Ellis Short about his transfer plans.

He added: â€œI havenâ€™t considered it and I certainly havenâ€™t had an opportunity to speak to a very important man at the football club who happens to own it.

â€œWe will sit down, we will assess it. I think he is going to be here for the last couple of games of the season, which is encouraging.â€