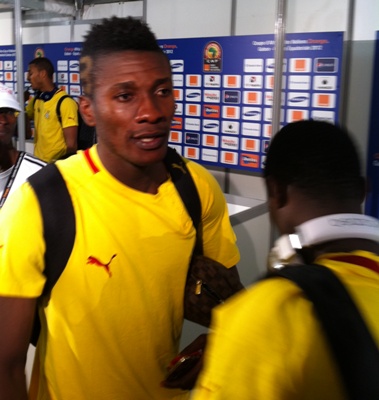 Ghana striker Asamoah Gyan believes they met their stiffest opposition so far at the 2012 Africa Cup of Nations in Guinea.

The Black Stars struggled to get going but managed a 1-1 draw with the Sylli Nationale on Wednesday to qualify into the quarter finals as Group D winners.

Ghana who looked very much the part in a previous 2-0 win against Mali were very poor to say the least in the final group game played in Franceville.

And Gyan, who struggled to impose himself on the game admits Ghana met its match if not better in the Syli Nationale.

â€œYes, this is the most difficult game we have played so far in this tournament,â€ the Al Ain striker told GHANAsoccernet.com.

â€œThey (Guinea) possessed the ball very well and were very effective on the wings and created a lot of problems for us.

â€œBut thankfully we managed to get the point to top the group so now we look ahead.â€

Ghana will now play Tunisia in the final quarter final match on Sunday at the Stade de Francville.