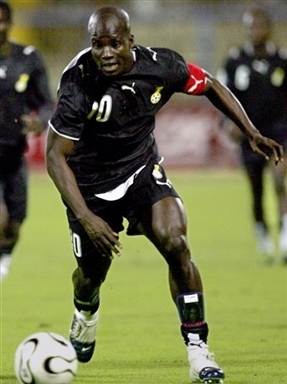 Ghana captain Stephen Appiah will be honoured by his country with a testimonial match following his decision to retire from international football.

The Ghana Football Association (GFA) says it will bid the retiring Black Stars captain a befitting farewell after the influential player wrote to the federation to announce his decision to end his national team career.

The match to celebrate Appiah's achievements as a Ghana international will come off later in the year against an opponent yet to be named.

"For us Stephen Appiah has become a symbol of our football history as he proudly represented the badge,â€ the Ghana Football Association said in statement.

"He is an example for all, for the youth and future generations. We are very proud to have had the honour of having worked with such a true leader.

"We intend to honour him with a befitting testimonial match later in the year."

After making his debut in 1996, Stephen Appiah went on to make the Black Stars one of the feared sides in the world.

The former Hearts of Oak ace united the squad previously plagued by serious infighting that hindered the progress of the national team for decades.

He scored 17 goals in 68 games for Ghana and during his captaincy, the Black Stars twice secured qualification to the World Cup finals â€“ the first time in the history of the country.