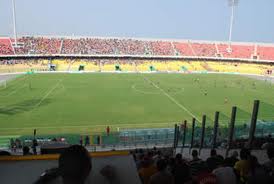 Ghana's 2012 Africa Cup of Nations qualifier against Swaziland will be played at the Accra Sports Stadium next month, GHANAsoccernet.com can confirm.

It will be the first to be played in the capital since the qualifiers began in September last year.

The Black Stars played just one match out of three home games at the Accra Sports Stadium in qualifiers to the 2010 Fifa World Cup finals.

Players have described the edifice as a cooker house and prefer the Baba Yara Stadium in Kumasi.

The 4 September date for the tie against the Shilangu is the last home match for World Cup quarter-finalists.

Ghana lead the Group I table with superior goal difference but are tied on points with Sudan.