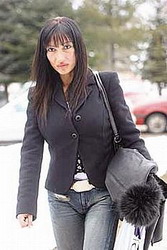 Ghana have turned to an effective horse placenta healer from Serbia to solve the injury crisis which is threatening its World Cup campaign, Ghanasoccernet can reveal exclusively.

Marijana Kovacevic, who is famous in world football through the application of traditional Serbian healing to heal her world-class football star clients, arrived in South Africa on Wednesday to take charge of the recovery of several Black Stars players.

Ghana are sweating over the fitness of Kevin Prince Boateng, Hans Sarpei, Asamoah Gyan, John Mensah, Andre Ayew ahead of their quarter final clash with Uruguay on Friday.

Some players in the squad also have knocks and stubborn injuries which prompted the Ghana FA (GFA) to approach Kovacevicâ€™s methods of healing the players.

She is expected to immediately start work of the affected players to get them ready for the crucial game against Uruguay.

The GFA also held a meeting with its team doctor Dr. Percy Annan who also approved of the trained pharmacist's arrival to help accelerate the recovery of the players.

Liverpool pair of Johnson and Fabio Aurelio both flew into Belgrade last year to get the treatment which helped them to recover.

Several other top class players like Frank Lampard and Yossi Benayoun have recovered fully since undergoing treatment with the expert healer.

Kovacevic's approach to healing has generated such interest that now, it is understood, she only responds to calls and text messages from trusted players.

It is understood it took hard bargaining to get her to work with the Ghana team as she only works for individuals rather than clubs or federations.

Working on a basis of recommendation, her reputation has gone sky-high to the extent that even the then Liverpool manager, whose club doctor Mark Waller is well-respected and also works for the England Under-21s, put his trust in her.

She uses fluids derived from horse placentas and electrolysis to treat the afflicted part of the players who visit her.

Players from all over Europe have been visiting Kovacevic on the basis of recommendations from international team-mates but now even clubs are giving their blessing to players seeing her.