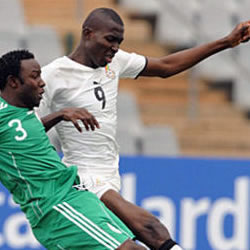 Ghana U20s avenged a recent defeat by Nigeria with a 3-2 win in an exciting clash at the Cape Town International Challenge Friday night.

Ghana drew with their Nigerian counterparts at the inaugural Cape Town Challenge two years ago and last year, they fell 1-0 to the Flying Eagles at the African Youth Championship, also in South Africa.

Fridayâ€™s win by the Black Satellites meant they and Argentina, who defeated hosts South Africa 3-1 in the opening game of this eight-nation tournament, have shot to the top of Group A with three points apiece.

Ghana outclassed Nigeria in the first half of this West African derby as they enjoyed most of the possession and threatened the Flying Eagles goal again and again.

Tolulope Aluko, a central defender who was played in an unfamiliar left back position, was the Achilles Heel for the Nigerians as Ghanaâ€™s lively forward Sarfo Gyamfi tormented the FRSC Abuja ace time and again.

Skipper and goalkeeper Samuel Okani was forced to make several saves as Ghana piled pressure in search of the opening goal.

But somehow, Nigeria survived this onslaught to go into the dressing room at par with their more cohesive opponents.

And it was against the run of play that the Flying Eagles took the lead through Enyimba ace Uche Agbo, who headed home after 47 minutes.

However, Ghana drew level almost immediately courtesy of a sweet shot from outside the box by Baba Rahman Abdul.

Nigeria stepped up in this half and were duly rewarded with a second goal by Wikki striker Aminu Umar off a goalmouth scramble in the 61st minute.

The goals brought this game to life and on 80 minutes, the Black Satellites restored parity for the second time on the night when Sarfo Gyamfi smashed home an unstoppable rocket of a free kick on top of the box beyond goalkeeper Okani.

And four minutes from time, Ghana grabbed the match winner courtesy of substitute striker Benjamin Annan-Fadi with a simple tap-in.

On Sunday, the Flying Eagles will battle Argentina at the Cape Town Stadium, before South Africa test their might against Ghana.

You can follow details of the game by clicking the link below: