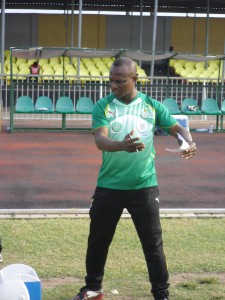 Coach Akwasi Appiah has uncharacteristically pounded his chest in the wake of Ghana's qualification to the finals of the All Africa Games.

The Black Meteors lined-up a rematch with South Africa after a hard-fought 1-0 win over the defending champions, Cameroon on Wednesday.

The soft-spoken coach who has had to superintend over several difficulties in the team's build-up which was exacerbated upon arriving in Mozambique, has been quick to tout the immense contribution made by the technical team in achieving the momentous feat.

"We (technical team) only had the chance to watch Cameroon for the first time when they played against Senegal," he said.

"We realized they had two very good midfielders of which we fashioned out a strategy to render them ineffective.

"We achieved this by making sure we had two players on them and also managed to cut out their supply lines which brought us this victory."

Ghana have now earned the chance to avenge a painful 1-0 loss suffered at the hands of the Amagluglug at the group stage and hopefully similar tactical ingenuity will be implored to win gold for the Black Meteors.