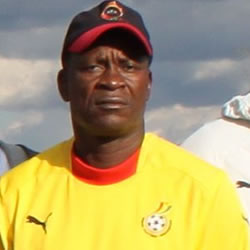 Ghana coach Wellington Olando has blamed the referee for a shock 2-0 loss to South Africa in a Cape Town International Challenge tie Sunday.

Hosts South Africa caused the first major shock at the eight-nation invitational tournament as they turned back the Black Satellites with two first-half goals.

The host nation have thus bounced back into strong reckoning in this eight-nation international invitational after they lost their opening Group A match 3-1 to Argentina on Friday.

The South Africa U20s took the lead after 39 minutes through a header by Thabani Mthembu off a corner kick and four minutes doubled their lead again off a free kick courtesy of Junior Sibande.

â€œIâ€™m disappointed with the referee. Our goalkeeper was pushed for the corner and from there they scored their first goal,â€ lamented Olando on the match handling by M. Makhobalo.

The Ghana coach though admitted his team were not as purposeful as they were against Nigeria on Friday.

â€œWe did not approach the game the right way, mentally we were sluggish. South Africa were more determined most especially in the first half.

â€œTheir numbers 7 (Snethemba Ngidi) and 6 (Jino Moeketsi) were everywhere in midfield, with or without the ball, they impressed me. They have a bright future ahead of them.â€

The South Africans could have pounded the Black Satellites of Ghana silly, but they were too wasteful in front of goal as they pierced through the Ghanaian midfield at will.