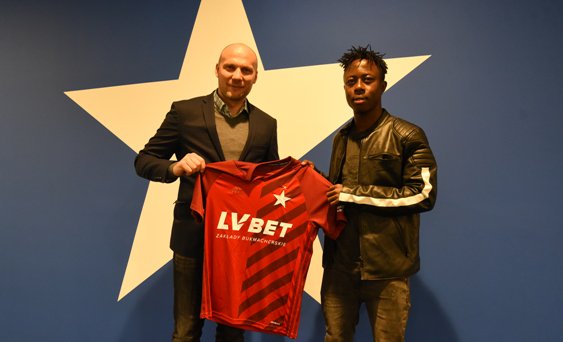 Ghanaian youngster Kumah was unveiled by Wisla Krakow on Friday

Ghana U20 ace Emmanuel Kumah has secured a big career breakthrough in Europe after joining Polish top-flight side Wisla Krakow on Friday.

The 19-year-old sealed the deal after impressing the side while playing at the U20 Africa Cup of Nations in Niger this month.

But he had to spend some few days training with the top-flight club before he was given the contract.

Kumah, who moves from Ghanaian second tier side Tudu Mighty Jets, will stay with the Krakow-based club on loan until the end of the year.

Wisla Krakow have the option to give the midfielder a permanent deal when his loan contract expires in December this year.

The deal is a major career advancement for Kumah who has played for the club known for nurturing top young players in Ghana.

He played for the Ghana national team in the U20 Africa Cup of Nations where the Black Satellites failed to advance beyond the group phase of the tournament.

Kumah played in three matches and was on the pitch for a total of 203 minutes.

He was born on February 9, 2000 in the city of Seikwa in the Brong Ahafo region of Ghana.

The left-wing attacking midfielder can also play on the wing.