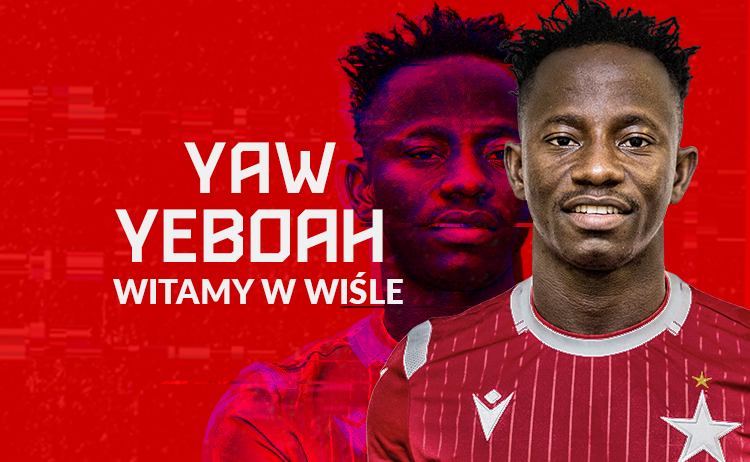 Yaw Yeboah was unveiled by Wisla Krakow on Tuesday evening

Yaw Yeboah's move to Wisla Krakow represents a major progress in his career blighted by moves to clubs that did know how to use the talented Ghana midfielder.

The 23-year-old sealed the move on Tuesday evening after passing a medical with the 13-time Polish champions.

He completed his move to Wisla Krakow on Tuesday as predicted by Ghana's leading soccer news outfit Ghanasoccernet.com.

This comes just hours after Ghana's leading football news outfit Ghanasoccernet.com revealed the move for the talented winger who recently captained his country's U23 side in the African Championship in Egypt.

Yeboah signed a three-year contract with the Polish side with the vision of getting more playing time Eastern Europe which would give him the needed exposure to come back to the top leagues of Europe.

The move to the Krakow-based side represents a major move in his career as this will also give him the chance to show to the top European clubs Yeboah's true potential.

He demonstrated his prowess at the recent Africa U23 championship in Egypt where Ghana narrowly failed to qualify for the Olympic Games after the heroics of Yeboah during the competition.

The winger's performances in the tournament in Egypt pleased a lot of clubs in Europe but given the chance to play him they never truly believed in his potential to create magic like he did the Black Meteors in Cairo.

Yeboah spent most parts of his career in Europe in Spain where he was hoping to make an impact in the La Liga but the lack playing time to demonstrate his talents was seriously lacking.

Now he can play more matches and replicate his Cairo form with the Polish side that has won the league title 13 times.

The former Manchester City player returned to Numancia where he had just one year on his contract before he agreed the move to the Polish giants.

He made 29 appearances and scored five goals for the second team of Celta Vigo.