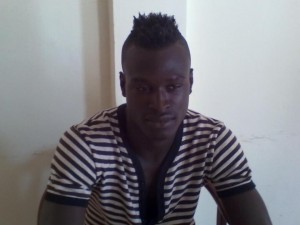 The 22-year-old moves from local side Wa All Stars after impressing on trials.

Gyimah, who played a key role for Ghana to win the All Africa Games title in Mozambique last month, will join the club when the transfer window opens in January.

â€œThey had him on trials for some weeks before they decided to hand him the deal.

â€œWe are delighted for him that he is making a positive move in his career given the huge promise he has shown.â€

Gyimah, who is seen as a bigger version of Michael Essien, burst onto the local scene following his exploits with Hasaacas where he was poached by Wa All Stars.

His power, pace, passing and technical abilities have attracted praise from several coaches on the local front before SuperSport spotted him.

SuperSport coach Gavin Hunt is positively surprised with the qualities of Gyimah when he arrived on trials few weeks ago.

"He is one of the best talents I have ever seen in my coaching career,â€ Hunt said.

â€œHe is going to be great addition in our quest to win the League title again this season."

Gyimah is one of the two highly-talented youngsters in the Wa All Stars squad.

17-year-old speedy winger Francis Sarfo Gyamfi is the local leagueâ€™s fastest player and has also been tipped for greatness.

Gyamfi has also been targeted by an unnamed South African side.