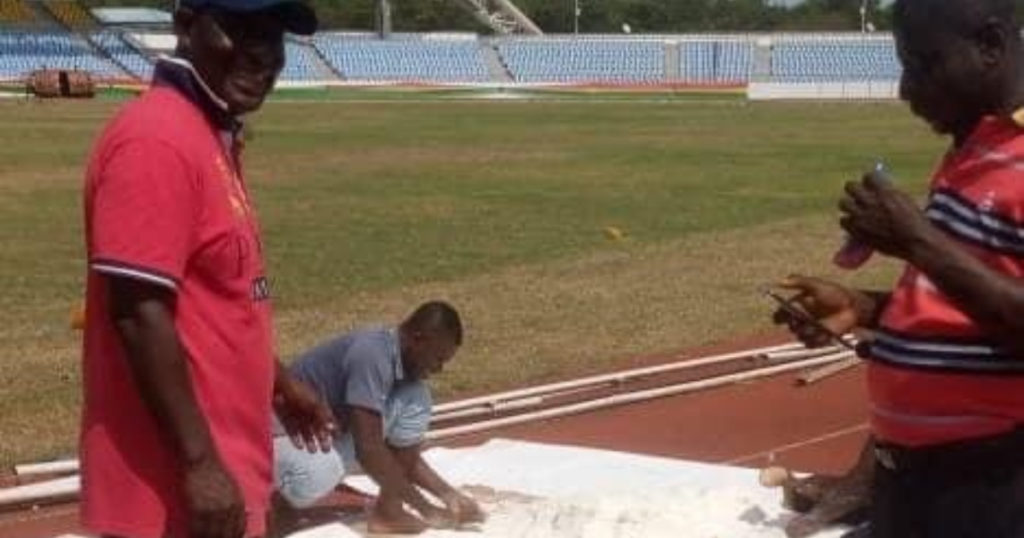 Ghana's sports authorities are racing against time to get the Cape Coast Stadium in top shape for the decisive 2022 World Cup playoff clash between the Black Stars and Super Eagles of Nigeria after the pitch was left in a terrible state just two weeks before the game, Ghanasoccernet.com can reveal.

Officials of the National Sports Authority (NSA), who manage all government-owned stadiums, have been left with no option than to work overtime to get the pitch ready for the blockbuster scheduled to be played later this month.

Several part-time workers as well as ground staff have been hired to work on the pitch day and night to ensure that the pitch and other facilities are ready in time for the match.

It is uncertain if the pitch would regain its lustre with just two weeks for the Cape Coast Stadium to host Ghana's biggest football match for the past four years.

The Cape Coast stadium,which has hosted all of Ghana's group games in the 2022 World Cup qualifiers, has been left in a sorry state after it was used for the Independence Day parade.

The pitch of the stadium, that is supposed to host the Black Stars versus Super Eagles blockbuster, has been left in a terribly bad shape after it was pounded with Independence Day activities on Sunday.

The newly built stadium in central Ghana has been left in terrible condition following the Independence Day parade on Sunday.

Military and police horses hit the ground for several hours during the parade to celebrate Ghana's 65th Independence which has left the pitch looking like a cassava farm.

The grass, that was approved by the Confederation of African Football (CAF), has suffered severe damage and the surface look brown, making it unplayable.

The pitch would not look unrecognizable for CAF officials who gave the greenlight to the Cape Coast Stadium to host the match that would attract global attention.

That is because global television stations will be beaming the match live on their screens and the poor state of the pitch would project Ghanaian and African football in a very bad light.

Top stars from both sides and their foreign clubs would also be worried that their players could be prone to serious injuries if they play on a pitch of such nature.

The players from the top clubs would also not be able to play their best football on a pitch of such nature which has been the bane of African football and how administrators take the issue of pitches for matches seriously.

This has sparked fears that the game could be relocated to another venue to avoid any embarrassment for African football.

With just eleven days remaining for the crucial World Cup playoff against Nigeria, the NSA has started emergency repair works.

Earlier, Ghana proposed the game be played in either Accra or Kumasi but the decision was rejected by FIFA and the Confederation of African Football.

Ghana played all home games in the group stages of the qualification in Cape Coast.

After the first-leg, the Black Stars will travel to Abuja in four days time for the second-leg and the winner of the playoff will progress to the World Cup in Qatar.