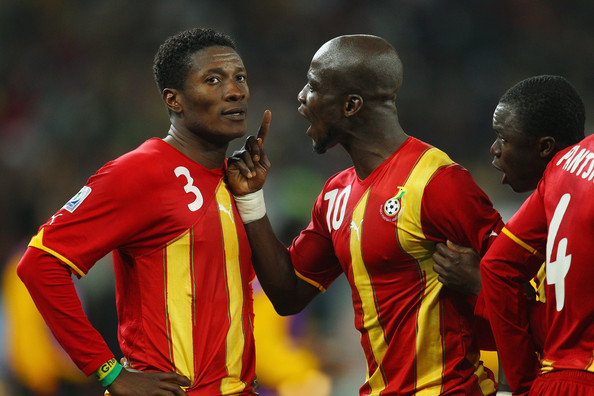 Ghana's quarter-final clash with Uruguay at the 2010 World Cup in South Africa has made it to FIFA's top 10 standout men's and women's world cup matches in the last 10 years.

So close to an African first

Ghana took on Uruguay in the quarter-finals of South Africa in 2010 with the hope of becoming the first African nation to reach a World Cup semi-final. Urged on by the crowd and their vuvuzelas, the Black Stars opened the scoring through Sulley Muntari, only for Diego Forlan to equalise and take the game into extra time. With 121 minutes on the clock and the match heading for a penalty shootout, Luis Suarez was sent off when he handled on the line to deny the Ghanaians a certain goal. The resulting spot-kick provided the African side with a gilt-edged opportunity to make the last four, but Asamoah Gyan spurned the chance, blasting the ball against the crossbar. Making the most of their reprieve, La Celeste won the resulting shootout.

Iniesta takes Spain to the top

While the Oranje had contested finals back in 1974 and 1978, this was a whole new experience for La Roja, though they were reigning European champions at the time. Dominated by the defences, a scrappy match had ticked into the 116th minute when a cross from Fernando Torres was only half cleared by the Dutch to the feet of Cesc Fabregas. His deft through-ball left Andres Iniesta in the clear, and the Barcelona midfielder made no mistake, thumping a half-volley into the back of the net. Iniesta took off his shirt as he raced away in celebration, and just a few minutes later Spain were crowned world champions for the first time in their history.

Winners of two of the first three Women’s World Cups, in 1991 and 1999, the USA had lost in the semi-finals at the previous two tournaments. They returned to the final in Germany, however, thanks to a generation combining the experience of Abby Wambach, Hope Solo and Christie Rampone and the youth of Alex Morgan, Tobin Heath and Megan Rapinoe. Facing them there were Japan, who had beaten Germany and Sweden after qualifying from the group phase for the first time since 1995.

The Stars and Stripes’ greater expertise seemed to weigh in their favour when they twice took the lead, first through Morgan in normal time and then through Wambach in the second period of extra time. Yet the Nadeshiko had a response on both occasions. Aya Miyama scored their first equaliser and then Homare Sawa popped up with three minutes of extra time remaining to take the match to penalties. The shootout proved to be a nightmare for the United States, as Shannon Boxx, Carli Lloyd and Heath all missed, leaving Saki Kumagai to stroke home from the spot to seal a maiden world title for Japan.

This was Brazil’s first World Cup semi-final in 12 years and expectations were high that they would prevail on home soil. Even with Neymar out injured and Thiago Silva suspended, the whole nation was expecting nothing other than victory. Though heavy rain had marred the build-up to the game, it was nothing compared to the deluge that was about to engulf A Seleçao. Thomas Muller put the Germans ahead 11 minutes in, a setback followed by the longest ten minutes in Brazilian football as Miroslav Klose, Toni Kroos (twice) and Sami Khedira all scored to give the Europeans a 5-0 lead with only half an hour gone. Andre Schurrle struck a brace of his own in the second half and though Oscar scored late on for the hosts, it changed nothing: Brazil had suffered the heaviest defeat in their history.

Indomitable Lionesses roar on their debut

The Cameroonians made their first Women’s World Cup appearance at Canada 2015 and enjoyed the kind of opening match most teams can only dream about. Madeleine Ngono Mani, Gaelle Enganamouit and captain Christine Manie were all on target for the African side in the first half, with a Gabrielle Onguene strike and two more goals from Enganamouit rounding off a fine attacking display. It was the biggest win ever by a newcomer to the tournament, and though Cameroon lost to defending champions Japan in their next match, they beat Switzerland to reach the Round of 16. Their run ended there, with a 1-0 defeat to the more experienced China PR. By that time, however, the Indomitable Lionesses had more than made their mark on the competition.

Canada 2015 produced a repeat of the previous final, as USA sought to avenge their defeat to the Japanese in the Germany 2011 showpiece match. The showdown was as good as over in the first 20 minutes, thanks to the immense talent of one Carli Lloyd. After firing home from a corner, she tapped in from a free-kick to double her side’s lead. Lauren Holiday then added a third for the Stars and Stripes before Lloyd completed her hat-trick with the goal of the tournament. Spotting Japan goalkeeper Ayumi Kaihori off her line, the USA star shot from the halfway-line, putting just enough power on the ball for it to creep over Kaihori’s head and into the net. That wonder goal put USA 4-0 up after only 16 minutes, and though the Japanese recovered to score twice, the Stars and Stripes’ 5-2 win gave them the best possible revenge and a record third world title.

It was hard to pick a favourite ahead of this Russia 2018 last-16 tie between Les Bleus and La Albiceleste. Antoine Griezmann’s penalty after Kylian Mbappe had been brought down made the issue a little clearer, but the Argentinians hit back through Angel Di Maria’s long-range strike and even took the lead when Gabriel Mercado flicked home. The French levelled it again when Lucas Hernandez broke down the left and crossed for fellow full-back Benjamin Pavard to hit a sublime half-volley into the top corner. Pavard won the Goal of the Tournament award for that effort, and it was followed by an Mbappe brace that secured France’s place in the next round, despite Sergio Aguero’s injury-time header. Les Bleus then accounted for Uruguay, Belgium and Croatia to secure their second world crown.

Not since Mexico 1970, when Germany beat England 3-2 in the quarter-finals, had any side come from two goals down to win a World Cup knockout match. Yet that is what Belgium achieved after Genki Haraguchi and Takashi Inui had fired Japan into a 2-0 lead just after half-time in this last-16 meeting. Just when it seemed the Japanese were poised for a place in the last eight for the first time in their history, the Red Devils responded.

Jan Vertonghen reduced the gap with a 69th-minute header before Marouane Fellaini nodded in to level the tie five minutes later. Undeterred, Japan forced a corner in the fourth minute of stoppage time, though the ball was comfortably collected by Thibaut Courtois, who rolled it out to Kevin de Bruyne. With the Belgians sensing one last opportunity, De Bruyne fed Thomas Meunier, whose low pass into the box was dummied by Romelu Lukaku, allowing Nacer Chadli to calmly side-foot the winner. The men in red went on to beat Brazil in the quarters before losing to France and eventually placing third, their best-ever World Cup finish.

The USWNT arrived in France with the aim of retaining their world title and faced Thailand in their opening match. The Asian side did what they could to restrict the world champions in the first half, ending it 3-0 down. They conceded another ten in the second half, however, with Lindsey Horan, Megan Rapinoe, Mallory Pugh, Carli Lloyd, Rose Lavelle (2) and Samantha Mewis (2) all getting on the scoresheet, though the star of the show was Alex Morgan. Her five goals equalled the tournament record set by compatriot Michelle Akers against Chinese Taipei in 1991. USA’s 13-0 win is the biggest in the competition’s history as well as its highest-scoring game and the one with the most goalscorers. The Stars and Stripes backed up their superb start to the tournament by winning all their remaining games en route to a fourth world title.

Though the Dutch were appearing in only their second Women’s World Cup, they were among the favourites following their UEFA Women’s EURO 2017 triumph. Their opponents in the last 16 were Japan, who had contested the previous two finals. Lieke Martens got the women in orange off to the perfect start when she backheeled the ball into the net on 17 minutes, though the Japanese conjured up an equaliser when Yui Hasegawa rounded off a superb team move just before half-time.

The Nadeshiko had chances to kill the match off, but were denied by the crossbar and Sari van Veenendaal in the Netherlands goal. With extra time looming, Saki Kumagai handled in the box and Martens kept her cool to tuck the ball away and end Japanese hopes of a third straight final. Appearing there in their place were the Dutch, who held their own against defending champions USA until the second half before going down to defeat. The Europeans nevertheless laid the foundation for what promises to be a bright future.