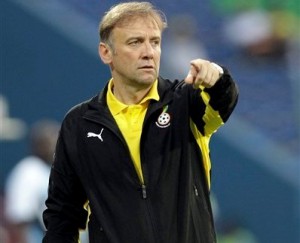 Ghana coach Goran Stevanovic has promised a better performance against Tunisia in the quarter-final of the Nations Cup.

The Black Stars have been criticized for an unconvincing display against Guinea on Wednesday which however earned them top spot in Group D.

Ghana's title winning credentials are in doubt and must dust themselves off before their knock-out stage clash on Sunday.

Stevanovic admits his side were handed a reality check by the Guineans who failed to qualify.

"It was a very tough game," Stevanovic said after the game.

"It was a very nervous game because Guinea needed to win and that complicated the situation.

"We started to win 1-0 but after one strange goal [Guinea equalizer] we continued to play and tried to win. We qualified but not practically [performance].

''The only thing on our head is maybe not too much ambition, not too much intensity. We would be better in the next game.''