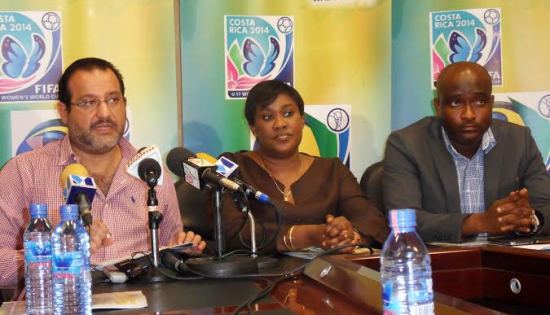 Officials of the Ghana television consortium at the press conference

The Ghana television consortium have accused TV3 of illegally marketing broadcast rights for the 2014 World Cup.

The consortium which is an amalgamation of five local television stations have jointly acquired the rights â€“ including radio- in an agreement with FIFA and AUB to broadcast the three FIFA tournaments in 2014.

The consortium however claim TV3 have began seeking sponsorship from corporate firms under the pretext of broadcasting the 2014 World Cup when they even donâ€™t have the rights.

â€œWe have prove of several correspondence between TV3 and some firms in Ghana looking to do business with the World Cup when they donâ€™t belong to the consortium,â€ Fadi Fattal, the Chief Executive Officer of Optimum Media Prime which is the exclusive marketing firm for the consortium said in a press conference on Thursday.

â€œWe have written to TV3 to tell them what they are doing is unprofessional and illegal and that there would be severe punishment if they donâ€™t stop.

â€œWe have also written to FIFA and AUB to report the unprofessional act of TV3.â€

The consortium insist they are the only approved body able to duly license broadcast firms interested in showing the World Cup and invited especially the radio stations to approach them for the requisite accreditation.

â€œIt is not difficult at all to get the rights from us,â€ the consortiumâ€™s co-ordinator George Lomotey said.

â€œFor the TV stations I am afraid it is too late to get the license if you are not already part of the consortium but then there is still the opportunity for radio stations.

â€œWe have categorized them to meet and satisfy the needs of all radio stations.â€