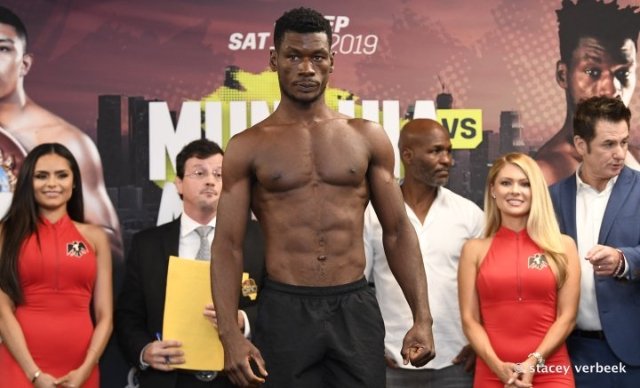 The fan who was pummeled by Patrick Allotey
Share

Ghanaian boxer Patrick Allotey is in big trouble after being caught mercilessly beating a football fan during the Super clash between rivals Hearts of Oak and Asante Kotoko on Sunday.

The disgraceful and shameful conduct has sparked outrage on social media after the WBO Africa Super welterweight champion was captured pummeling the powerless supporter at the Accra sports stadium.

The fan, who was cloud in a Kotoko jersey suffered a technical blowout after being handed hefty punches by the boxer.

It's unclear what sparked the confusion, but the boxer is now facing sanctions from the Ghana Boxing Authority and other global organisations.

Allotey could lose his licence if he is found guilty of misconduct as his action has crowded the epic thriller in the Ghanaian capital.

The lack of discipline and self-restrain has put the boxer in an embarrassing corner as he appears to have lost the backing of many people on social media.

For a boxer,who will need the backing of Ghanaians in his flagging career, this is massive clapback.

Boxers are barred from throwing punches outside the ring and could put him a tight corner with authorities.

Allotey lost his last fight yo Mexican Jaime Munguia and appears to have used the helpless fan as a dress rehearsal for a potential return to the ring.