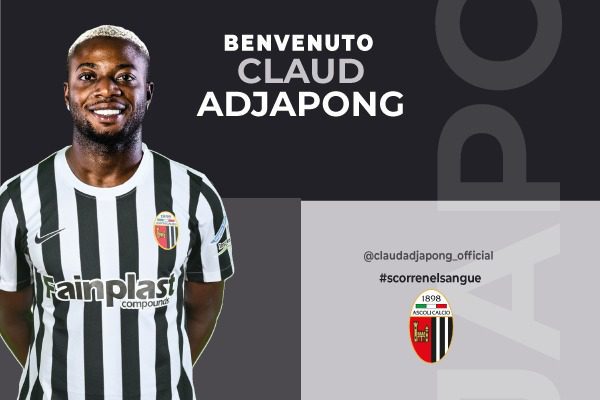 Ascoli Calcio have completed the definite acquisition of the services of defender Claud Adjapong from Sassuolo, GHANAsoccernet.com can report

The Italy-born Ghanaian player signed a three-year contract with the Serie B club on the summer transfer deadline day on Thursday.

The new bianconero is a right-back, if necessary outside the wing, who grew up in the Sassuolo youth team.

Adjapong made his Serie A debut on 11 March 2016 against Juventus. He replaced Matteo Politano after 89 minutes in a 1–0 away defeat.

The debut in the Europa League took place during a match against Rapid Vienna in the 2016-17 campaign.

In the same season played for the Primavera side where he won the Viareggio tournament and in the first team, he made 9 appearances

Adjapong scored his first goal in the Serie A against Cagliari on 22 December 2016.

During his spell at Sassuolo the 24-year-old played a total of 37 matches in Serie A, scoring 2 goals and 1 assist.

He has previously enjoyed loan spells at Reggina, US Lecce and Hellas Verona where he featured 39 times in the Serie B, scoring once and provided an assist.