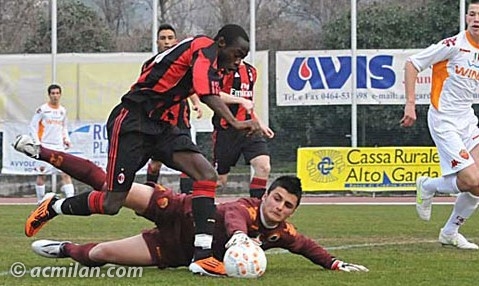 Ghanaian youngster Kingsley Boateng steered AC Milan to the Italy youth title by scoring the only goal as they Empoli 1-0 in the title-deciding final this week.

The 17-year-old striker ensured that Milan are champions of Italy at Allievi Nazionali level four years after winning the trophy in 2007.

A very united Rossoneri team took control of the game on 22 minutes when Kingsley Boateng, who is not related to Kevin Prince, scored the decisive goal.

The 17-year-old Kingsley, who is a feared striker, has been at Milan since 2007 and was born in Pordenone, Italy to Ghanaian parents.

Milan finished their regular season on top of their league with 67 points from 26 games, seven points ahead of Inter and Atalanta.

Boateng has become one of the most important players in the youth leagues of Italy and he's expected to be given a shot in the AC Milan first team in the coming months.

Unlike Mario Balotelli, Boateng is more connected to his Ghanaian roots and could be easily convinced to play for Ghana instead of Italy.