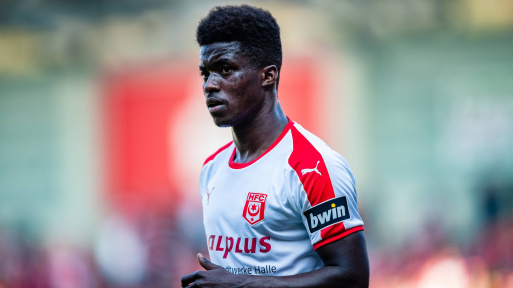 Braydon Manu was not really satisfied with his second division debut at Erzgebirge Aue . The processes and mechanisms were not there beforesaid the offensive player on Wednesday. "But that comes with time. If you play a lot, you know how to move and what the other person wants from you. ”

Manu has not played a competitive game for over a year. After moving from third division club Hallescher FC to Böllenfalltor last summer, he injured himself in preparation, dropped out of the first half of the season and had to wait until now.

Through this hard time, his belief in God helped him. "When you're in such a difficult phase, you always need a rock, an anchor, that gives you a hold," he said. But his family and his teammates - especially Patric Pfeiffer and Erich Berko - would also have been very supportive. "They gave me the push to believe even more in myself, to believe more in God, so that I can get out of this situation at some point."

Braydon Manu on his debut: "It came as a surprise to me too"

On Monday, trainer Dimitrios Grammozis had certified the 23-year-old German-Ghanaian had a good training performance. But after Manu before that only in the game against Dresden part of the squad , he was right in the starting line-up against Aue. "It came as a surprise to me," he said and added with a laugh: "But at some point you have to start."

Compared to the 3rd league, he did not find his first game in the 2nd league to be faster. Against Aue it was not easy for him as an offensive player because the Saxons trained by ex-lily coach Dirk Schuster had closed with a chain of five at the back. After all, he took out the penalty to equalize ("100 percent hit me") and contributed something to the result.

Victor Pálsson was not so critical of his teammate's performance - on the contrary. "It was great," said the Icelander about the performance of the 1.70 meter tall manu, whom he called "my little brother". Step by step, he will now get even better.