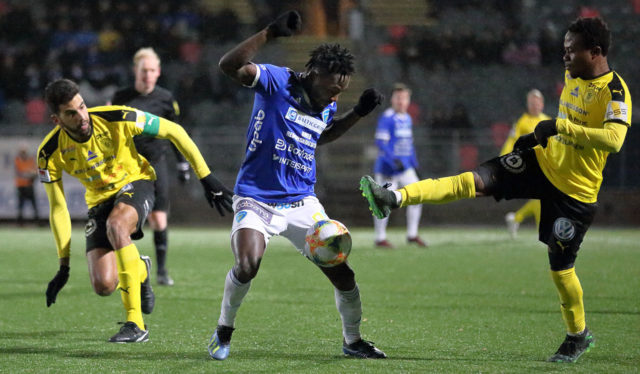 Emmanuel Yeboah (in blue) has been key for Umea

Former Ghana youth international midfielder Emmanuel Yeboah has been noted as the key player for Swedish side Umea FC as they gained promition to second tier league.

The former Black Satellites stylish left footer scored six goals in the just ended league which helped his return to the Superettan.

His goal scoring feat ranked him the second best midfielder with highest goals scored in the 2019 league season.

Yeboah might be pushed to renew his contract with Umeå FC although he is on the books of Malmo FF.

Other clubs in the Swedish top-flight league are also pushing for his services in the upcoming season - agents close to the player have told Ghanasoccernet.com.

The Superettan is contested by 16 clubs, it operates on a system of promotion and relegation with Allsvenskan and Division 1.

Seasons run from April to October, with teams playing 30 matches each, totalling 240 matches in the season.

The second tier of Swedish football had previously consisted of a varying number of regionalized leagues operating under the Division 2 (1924–1986) and Division 1 (1987–1999) names.