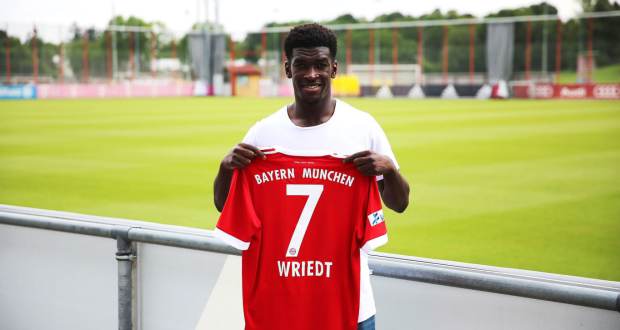 The 23-year-old joined the Bavarian giants on a three-year deal from third-tier side VfL Osnabrück but will spend the season at Bavaria II.

“That feels good”: Kwasi Okyere Wriedt after his unveiling.

“This already feels good,” declared Wriedt immediately after his contract signature. “I am looking forward to the great challenge in Munich”, the 23-year-old is quoted on the club’s website.

The offensive midfielder completed the medical check on Säbener Strasse on Thursday and Friday, signing a contract with a three-year term.

“We are delighted that Kwasi Okyere has decided to change to Munich,” said Jochen Sauer, FC Bayern Campus manager, about the new entry.

“He has already gained experience in the 3rd league, but he is still a young player in which we see ample development potential,” Sauer continued.

Wriedt made a total of 39 appearances in the last two seasons, where he scored 12 goals and 9 assists.