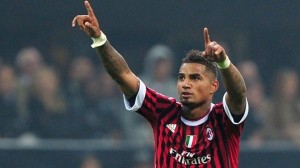 Kevin-Prince Boateng made a surprise return from injury to play the entire match for AC Milan which secured qualification to the Uefa Champions League knock-out stage following a 1-1 draw with BATE Borisov.

Didier Deschamps named the Ayew brothers in his starting line as they held Arsenal to a 0-0 drawn game at the Emirates Stadium in a Group F fixture.

Winger Andre Ayew distinguished himself with an inspirational display for Marseille throughout the regulation period but Jordan Ayew was replaced by Andre Gignac after 84 minutes.

Midfielder Emmanuel Frimpong was absent from the Arsenal squad.

Villarreal crashed to their fourth defeat of the campaign with a 0-3 reverse at home to English side Manchester City at the El Madrigal.

Ghana youth winger Mubarak Wakaso was cautioned on the 27th minute and lasted 77 minutes for the Yellow Submarines.

Sulley Muntari, who was not registered by Inter Milan for the Group stages, watched as a spectator from the Giuseppe Meazza stands when they defeated French champions Lille 2-1.

Ghana captain John Mensah failed to make the grades for the Olympique Lyon 18-man squad that lost 2-0 to Real Madrid at the Municipal Stade de Gerland.

A brace from Cristiano Ronaldo sealed the win for Madrid who have not conceded a goal in this season's competition.

In Europa League matches on Thursday, Red Bull Salzburg slipped to a 1-0 defeat Spanish side Atletico Bilbao at their favourite Red Bull Arena.

Standard Liege assumed leadership of Group B with a 3-1 win at Vorskla Poltava with versatile Ghana defender Daniel Opare was an unused substitute.

Atletico Madrid condemned Udinese to a 4-0 defeat at the Estadio Vicente CalderÃ³n.

English second-tier side Birmingham City fought from behind to draw 2-2 with Belgian side Club Brugge.

Stade Rennes surrended a 2nd minute lead to lose 3-1 at Scottish side Celtic. Ghana defender John Boye is out with an injury.

Schalke 04 failed to break the resistance of Cypriot side AEK Larnaca as they were held to a 0-0 draw at the Veltins-Arena.

On Tuesday in the Italian Serie B, striker Richmond Boakye-Yiadom scored a brace for Sassuolo who thrashed Modena 5-2.

The former Ghana U20 frontman scored in the 45th and 52nd minutes.

Yaw Asante returned to the Grosseto first team but sat on the bench as they lost 1-0 at home to Bari.

In the Primavera Coppa I'talia, defender Bright Addae was sent off when AS Roma defeated Parma 2-1.