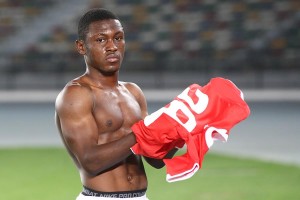 Spartak Moscow reluctantly sold the in-form Nigerian striker to Fenerbahce following pressure from the player and the Turkish giants.

The Russian only agreed to sell the player to Fenerbahce because their Ghanaian striker Abdul Majeed has recovered from a knee injury.

With the young Ghanaian striker now available for action they agreed on 13 million Euros for the Nigerian star to move too Turkey.

Waris joined Spartak Moscow last season but has failed to replicate the form that saw him win the best player and top scorer award in the Swedish league last season.

A serious knee injury limited him to a bit part role at Spartak Moscow resulting in just seven matches without a goal.

Now with Emmanuel Emenike leaving the club, Waris is expected to step up to the plate to deliver the goals for the Moscow-based club.