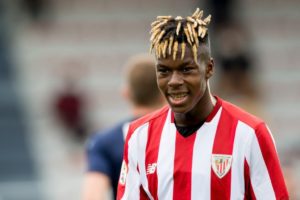 Atletico Bilbao winger Nico Williams has been named in a 100-man list for the 2022 Golden Boy award.

The 19-year-old is among a number of Under-21 players who have been named in a long list of players named for the award.

He joins Ghanaian compatriots Kamaldeen Sulemana and Felix Afena-Gyan - who have also been named in the list.

The Golden Boy  award is designed to recognize the best player under 21 in European football.

This prestigious award granted by the Italian newspaper Tuttosport has been considered for some years now as the Ballon d'Or for young players on the international scene.

The number of candidates will be reduced from then on each month by a total of 20 units until October 15, at which time the decision to crown the Golden Boy will fall on 40 international sports media who will decide between the 20 young soccer players who still remain on the list.