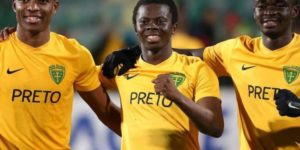 Ghanaian youngsters Aremeyaw Abasa, Henry Addo and Richmond Owusu starred for MŠK Žilina in their over Inter Milan in the UEFA Youth League.

The Slovakian side were 3-1 winners against Inter on Tuesday at the Stadion Pod Dubňom in Zilina.

Abasa, Addo and Owusu all started and played a key role in helping their side secure a convincing win against the youth side of the Italian giants.

Mario Sauer bagged a brace in the 1st and 47 minutes of the game to give Žilina a two-goal advantage before Oliver Jurgens pulled one back for Inter twenty minutes later.

Vladimir Valko scored in the dying embers of the game to seal the victory for Žilina.

Žilina have now progressed to the quarter-finals of the competition.