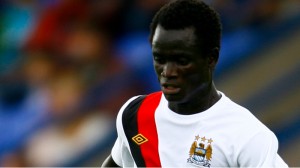 The 18-year-old, who has been likened to Chelsea powerhouse Michael Essien, was spotted by the club's scouts in Accra.

Ghanasoccernet sources understand that when he matures enough to play in the club's star-studded first team, he will be handed a massive salary.

As Abu is unable to readily secure a work permit to play in England he has been loaned out to play in the Norwegian top flight.

Abu will go on loan to Norwegian side Stromsgodset until the end of June 2011.

A dynamic, tough-tackling midfielder, Abu recently trained at the Academy and played for the Elite Development side in three pre-season games.

He was spotted by the club's recruitment network playing for Sporting Club Accra, having been developed by their Right To Dream academy.

Stromsgodset's sporting director is former Norway and Sheffield United striker Jostein Flo, and Abu will now play for the Norwegian Premier League club in the town of Drammen, just outside Olso.

Abu will be of good interest to the Ghana U20 side who are looking to retain the World Cup they won in Egypt last year.