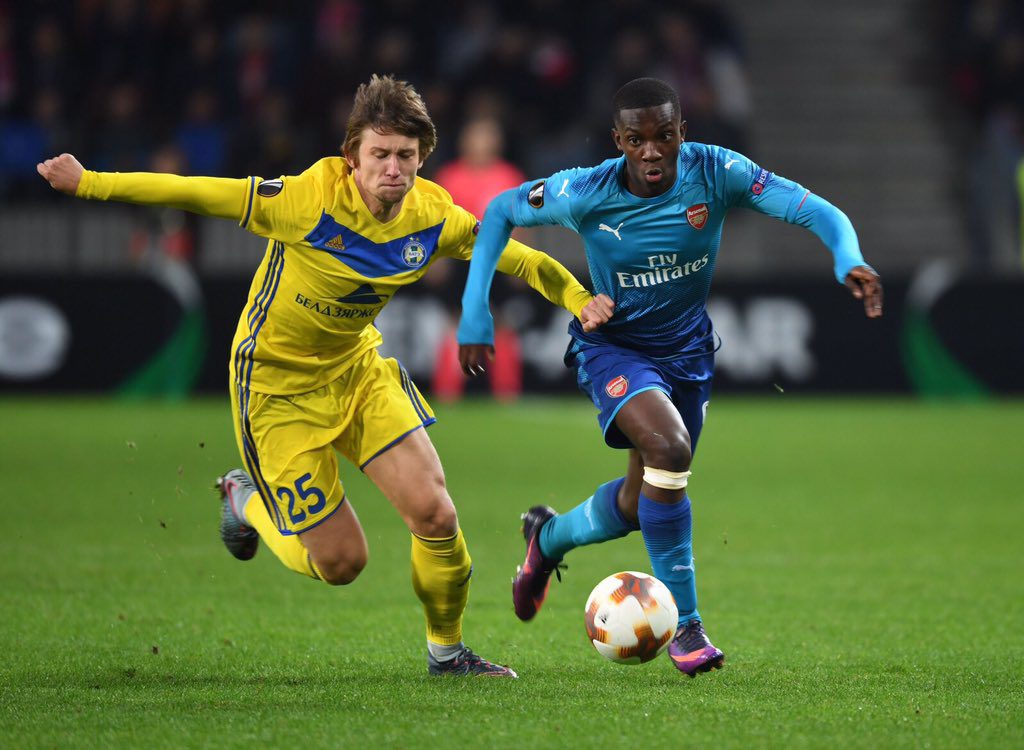 Eddie Nketiah in his competitive debut for Arsenal
Share

Ghanaian Eddie Nketiah made his competitive debut for English side Arsenal in their 4-2 away win over Bate Borisov in the Europa League on Thursday.

The 18-year-old came on as a substitute in the 89th minute of the game in Belarus for his first competitive match for the Gunners.

Nketiah, who was born in London to Ghanaian parents, made his historic appearance as he replaced Willock in the 89th minute.

The striker signed his professional contract with the Gunners over the summer and has now gained his chance to impress.

Theo Walcott scored twice as a much-changed Arsenal beat Bate Borisov in the Europa League to make it two wins from two in Group H.

Jack Wilshere was excellent and set up a Walcott chance which hit the post before assisting the forward's close-range opener.

But Mirko Ivanic pulled one back for the Belarusians after one of their few real attacks in the first half with an excellent 10-yard header from Aleksey Rios' cross.

Arsenal restored their three-goal advantage after the break as Olivier Giroud scored his 100th Arsenal goal from the spot after a soft penalty award against Vitali Gayduchik, who did not appear to make much contact with Shkodran Mustafi.

Bate did pull another back when Mikhail Gordeychuk slammed home from close range after David Ospina parried Ivanic's header.

And Arsenal - who had looked comfortable up to that point - were hanging on at times in the end. Aleksandr Volodko could have set up an anxious finale but he fired a shot wide from inside the box.

The Gunners are top of Group H on six points with Red Star Belgrade second on four points after they beat Cologne, who have lost both matches, 1-0 thanks to Richmond Boakye's goal.