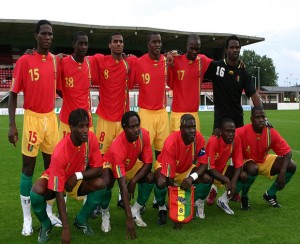 Ex-France youth international Razzagui Abdoul Camara was included in the squad even though his nationality switch is yet to be approved.

Djoliba defender Ibrahima Sory Bangoura is only outfield home-based player in the team.

The 21-year-old Camara, who plays for French top-flight side Sochaux, wants to switch allegiance to enable him play for the country of his parents.

Fifa are yet to approve his application but he was included in coach Dussuyer's squad.

However, two other former France youth internationals Larsen Toure and Richard SoumahÂ  were not selected even though they has indicated their desire to play for the Sylli National.

Guinea will start their cmaping in Conakry on 2 January before travelling to Abidjan a week later for a seven-day training camp.

The Sylli National will be based at the academy of Asec Mimosas during their stay in the Ivory Coast.

The squad will be whittled down to 23 before they travel for the Nations Cup.

Guinea are planning to line-up a friendly in Conakry on 18 January after Sudan withdrew from a friendly the two countries arranged last month.

They will then travel to Franceville where they will face Mali, Botswana and Ghana in Group D of the 2012 Africa Cup of Nations.