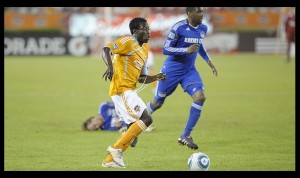 Ghanaian striker Samuel Appiah scores in his debut for American top flight side Houston Dynamo in their 3-0 win over Kansas City Wizards on Saturday night in the Major League Soccer.

Luis Angel LandinÂ also had a goal and an assist to lead theÂ Houston DynamoÂ to a 3-0 victory over theÂ Kansas City WizardsÂ on Saturday night.

Landin scored in the first half and assisted onÂ Brian Mullan's goal to help the Dynamo (3-2-1) improve to 3-1 at home.

Landin left the game in the second half because of a left ankle injury and did not return.

Samuel Appiah, who made his MLS debut as a late substitute, completed the scoring for the Dynamo in the 88th minute.

Houston goalieÂ Pat OnstadÂ made two saves en route to his second shutout of the season.

They had allowed just one goal in their first four matches and were coming off a scoreless draw against league-leadingÂ Los Angeles.

The Dynamo opened the scoring in the 24th minute when Landin took a pass fromÂ another Ghanaian Dominic OduroÂ and slipped a shot byÂ Jimmy Nielsen.

The Wizard's bestÂ scoring chanceÂ came in the 12th minute when former Dynamo player KeiÂ KamaraÂ broke free down the far side.

With only Onstad to beat, KamaraÂ hit the side of the net.

Mullan made it 2-0 in the 52nd minute when he took a pass from Landin, zipped through the defence and fired a shot past Nielsen from just inside the box.

Appiah scored in the 88th minute to seal the victory after tapping in a cross from the right.