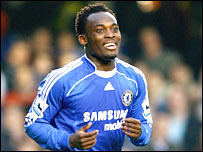 Ghanaian midfielder Michael Essien will kick off the new season against West Brom on Saturday as one of the few Chelsea players anxious to put the memory of the most recent campaign behind him.

While his teammates marked Carlo Ancelotti's first term in charge with the club's first ever Premier League and FA Cup double, the midfielder looked on from the sidelines after suffering a serious knee injury.

The injury also prevented the 27-year-old from taking part in Ghana's memorable World Cup campaign but after returning to pre-season training before many of his colleagues, Essien is now fully fit and ready to feature in his first league game in 2010.

Despite last season's success, the Blues suffered in the midfielder's absence and his return goes a long way towards easing concerns about the club's lack of activity in the transfer market after a summer that has seen the departure of five first team players have left while attacking midfielder Yossi Benayoun remains the only senior newcomer.

"It feels so good to be back, it has been a long way back but everything is behind me now and I'm enjoying playing football again," said Essien.

"These injuries are part of football, so you have to take them when they come and not get too down about it.

"I knew if I worked hard I would be back again so that's what I did and I am back on my feet."

He added: "I know a few years ago it could have been the end of my career but with new technologies, surgery and techniques things are good, so yeah, let's go again this season.

Chelsea's pre-season preparations have hardly run smoothly with Ancelotti conceding his side are still short of full fitness.

The visit of newly-promoted West Brom, though, should provide a routine three points, while subsequent meetings with Wigan and Stoke will provide breathing space before more daunting opponents loom after the transfer window shuts.

Essien, though, is primarily concerned with his own condition.

"We've had a bit of a bad pre-season with losing games but more importantly it has been good for me to be gaining fitness again and making sure I am sharp and ready for the season," the midfielder added.

The opening day task facing Roberto di Matteo's side could hardly be tougher as they attempt to finally establish themselves in the Premier League.

The Baggies have flitted between the top two divisions over the past decade and been involved in a promotion or relegation in all but two of the last nine seasons.

Di Matteo returns to his former club with a squad bolstered by five new arrivals including Nicky Shorey, the left back signed from Aston Villa for 1.5 million pounds.

Shorey found opportunities limited at Villa Park and is now anxious to make a fresh start.

"It is going to be a tough season and we could not have wished for a harder start going to the home of the reigning champions," said the defender.

"But that is something we should all be looking forward to. Albion worked really hard to get into the top flight last season and we want to stay there."