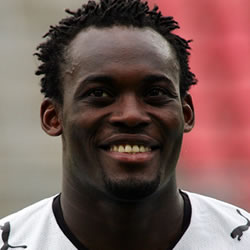 Chelsea's Michael Essien is hoping to put two injury-plagued seasons behind him and help the Blues retain their English Premier League title.

The Ghana midfielder missed the majority of the last campaign after tearing the medial ligament in his left knee while training with Ghana prior to the Africa Cup of Nations in January.

The injury came after a cruciate knee ligament injury restricted the influential midfielder to 19 appearances the previous season when Chelsea struggled to third place in the league.

The 27-year-old, who has played all five of Chelsea's pre-season games, is now hoping for an injury-free season to allow him to make a big contribution to what will undoubtedly be a long and hard campaign.

"It is good to have a pre-season under my belt, personally I think I have done well and I keep getting fitter the more games I play," he told Chelsea's website.

"I feel like I am ready for the season and I am looking forward to it so much.

"I think this season could be a big one," he added.

"The last two seasons I didn't take too big a part in, I didn't start in one but finished it, then I started okay last season but didn't finish it, so this year has to be a good one and hopefully I will stay injury-free and help Chelsea win some trophies."

Essien admits that he was not too disappointed to be hit by the injury, even though it ruled him out of representing Ghana at the World Cup in South Africa.

"These injuries are part of football, so you have to take them when they come and not get too down about it," he added.

"I know a few years ago it could have been the end of my career but with new technologies, surgery and techniques things are good, so yeah, let's go again this season."

Ricardo Carvalho became the fifth player to leave Chelsea this summer when he completed a Â£6.7million move to Real Madrid yesterday.

The Portuguese, who followed Joe Cole, Michael Ballack, Juliano Belletti and Deco out of Stamford Bridge, revealed that he had reached an agreement to leave the club last summer when Inter Milan - then coach by current Madrid boss Jose Mourinho - were interested in him.

He said: "Last year, when Inter wanted me, I said that last season would be my last in England. Chelsea agreed to that, and that's why the transfer has been so easy.

"I had told them that I wanted to leave and have a go at playing in another country when I was 30 and 31 but they didn't let me."

Carvalho has signed a two-year deal with the Spanish giants where he is reunited with Mourinho, who was previously his manager at both Chelsea and Porto.