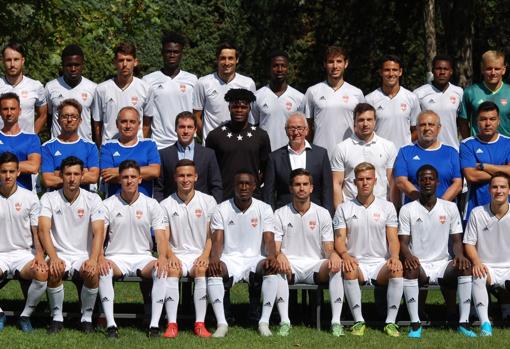 The ball is a chewing gum that many players are giving way to the benches when the time comes for withdrawal. Others prefer to join representation agencies and the less, such as Ronaldo Nazario at Real Valladolid , are still linked to this sport by controlling a club from the box, an adventure to which active players also begin to join.

Gerard Piquébought FC Andorra at the end of 2018 spurred by an ambitious project to try to guide the club from Preferential category to professionalism, a daring step that the red-and-white Thomas Partey has followed this summer .

The hero of Atlético in the comeback of the last day of the League against ÉibarSince August, he has been one of the four people responsible for making decisions for the management of Alcobendas Sport, in the Third Division of Madrid.

"He brings his experience in football and for boys it is a great stimulus to see Thomas through our stadium," they explain to ABC from the entity.

A few hours before finishing the ball that gave the leadership to Atlético in that match against the Eibarreses, Thomas had picked up the phone to receive the first good news on Sunday because his other team had managed to start a point in the difficult field of Atlético Pinto. «He is very excited about the Alcobendas Sport project .

He joined the club at the end of August with his representative, José Jiménez, and his son, José Daniel. They, together with a fourth partner, are now the ones who control the team ». The Madrid team missed last season the promotion to Second Division B in Villarrubia de los ojos (Ciudad Real) and the group led by Argentine Gustavo Mascardi, representative who once intervened in movements of football players as well known as Hernán Crespo, Piojo López, La Brujita Verón or Martín Palerm o, threw in the towel and closed his stage at Luis Aragonés, a charming stadium with a capacity for 2,000 people.

«We are delighted with the arrival of Thomas and his partners, the treatment they are giving us is spectacular. They are very close and the project conveys seriousness, ”says defender Diego De Pedro.

Soccer in the north zone

Leganés, Getafe, Fuenlabrada and Alcorcón. In the last decade, football has spread in Madrid through the south of the Community, which has more representatives in the first two Spanish leagues, and the objective with which Thomas and his partners have presented is to promote and promote this sport in the north zone. Also attract the fans and increase the social mass because in the first two league games played as local assistance has been poor. «They have arrived with little time to form the squad and this first season will be, in principle, transitional», they say from the club, founded in 1995. In the future, if all goes well, the goal of the rojiblanco can become so ambitious as the one that has been marked Gerard Piqué in FC Andorra.

Barça defender and president of the Kosmos Group, the company that owns FC Andorra, revealed his intentions by acquiring the club of the Principality. "People who know me know that I am very ambitious and today you will laugh, but I dream that the Champions anthem will sound in Andorra," he said at the beginning of the year after closing the purchase of a Regional team that at the end of the year got celebrate the promotion to Third Division. The azulgrana did not speak of a bluff and in summer he paid 450,000 for the place vacated by the Reus in Second Division B, the category in which the Andorran team plays this campaign. Two promotions in the same year.

"Here we are more modest and we go slower, we have our feet on the ground," they respond laughingly at Alcobendas Sport when asked about Thomas's plans. For the midfielder, Atlético de MadridIt is obviously the priority and its members are those who manage the day to day of the club, but the Ghanaian always goes to the stadium to give encouragement and advice to the kids. Also to speak with the three compatriots who have joined the squad, which has two footballers from Ivory Coast.

"They look very good ways, they need to be coupled because they arrive shortly, but they promise," predicts De Pedro. The team of Thomas, which has called the attention of the defender for his simplicity and shyness, is missing a goal in this championship start and in his first three games he has not been able to celebrate any. Two draws is the harvest so far of the team now trained by Javi Baños, curiously the technician who did the test and opened the doors of Atlético to Thomas after arriving in Spain.

In 2011, José Jiménez, FIFA agent , and his son José Daniel brought Thomas to Spain after they were notified by one of his contacts in Africa, who told them wonders of a boy who was then 17 years old. Seeing him, the midfielder did not disappoint them and even exceeded expectations. Since then, Thomas has established a relationship with them far beyond the professional and considers them part of his family, so he has not hesitated to embark with them on the project to boost Alcobendas Sport. A decision and an unusual step in an active soccer player.

Other players who continue to run with the ball, such as Joaquin, also invest in football although through the purchase of shares.In 2017, the midfielder disbursed 1.1 million euros in greendish titles, becoming the fourth largest shareholder in the entity. Unlike the Sevillian, Thomas and Piqué are the ones who make the decisions.