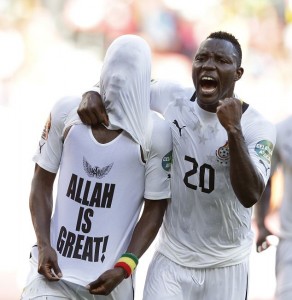 Ghana influential midfielder Mubarak Wakaso is facing big trouble for showing a religious slogan on his T-shirt as he celebrated his goal at the 2013 Africa Cup of Nations in Thursday.

The Spain-based midfielder Wakaso stepped up in place of Asamoah Gyan to bury a 38th-minute penalty and give Ghana a 1-0 win over Mali at the Group B match at the tournament in South Africa.

Wakaso's celebration, when he pulled his team shirt over his face to reveal the words 'Allah is Great!' on a T-shirt underneath, could have more repercussions for Ghana.

He got a yellow card immediately after the celebration Â although it wasn't clear if it was for pulling off his shirt or for the message underneath.

The caution was already his second of the group stage to leave him facing a one-match suspension.

What could count in Wakaso's favour is the fact that Egyptian star Mohammed Aboutrika was not punished by CAF for a similar celebration at theÂ 2008 African Cup of Nations.

After scoring a goal in Egypt's 3-0 over Sudan in the 2008 African Cup of Nations Aboutrika removed his jersey to show a T-shirt reading "Sympathize with Gaza". He was protesting against Israel's 10-day blockade of Gaza. He was given a yellow card for breaking FIFA's rule against displaying political slogans during play, and was said to face possible further sanctions, but finally CAF made no punishments.

Watch video of Wakaso's goal and the T-shirt celebration