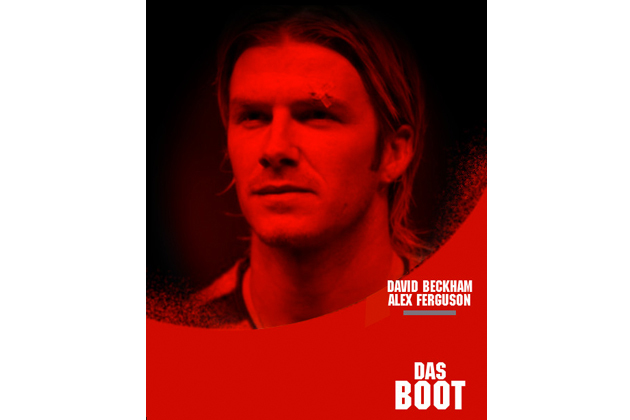 Ghana's 2014 World Cup campaign descended into farce when the team refused to play withoutÂ a $3 million bonusÂ being sent to them in cash. Some players were pictured kissing their share of the money, while others admitted they hid it in their bagsÂ in the dressing room during games.

It now follows that the Black Stars' ordeal will be turned into a Hollywood movie, with "someone like The Rock" an ideal candidate to star (as perYahoo Dirty Tackle).

In light of this forthcoming Ghanaian thriller, here are 10 other scenarios from the beautiful game that should also be documented on the big screen.

In the Manchester United dressing room, Sir Alex Ferguson resentedDavid Beckham's showbiz lifestyle. So, he hatched a plan to devastate the midfielder's beautiful marketable mug:Â kicking a boot at his faceÂ and making it look like an accident.

This film, directed by Oliver Stone, unravels the conspiracy.

Radamal Falcao in 'Along Came Coco'

He shoots... he squawks!

According toÂ The SunÂ (viaÂ ESPNFC), Radamel Falcao has a pet parrot named Coco that celebrates whenever his owner scores.

This kind of relationship is easily quirky enough to form the basis of a charming rom-com, with Falcao in a will-they-won't-they chase with Jennifer Anistonâ€”and all intimate moments ruined by something bird related.

Shortly after Roy KeaneÂ instructed Mick McCarthyÂ to "stick it up [his] b------s," the Irishman returned home from Ireland's 2002 World Cup camp in disgrace.

At home, journalists camped out and watched him take his beloved dog Triggs for walkies. This movie would be shot from Triggs' perspective, showing us the calm, gentle and nurturing side of the former Manchester United midfielder that he'd never let us believe exists.

Ali Dia pulled one of the greatest ruses in football history in 1996, when he earned a solitary appearance in a Premier League game for Southampton afterÂ pretending to be George Weah's cousin. His substitute appearance was so bad that he had to be substituted out again.

This tale of deception, trickery and mild stupidity from Southampton's staff deserves to be dramatically retold on the silver screen.

Frank Lampard in 'The Lampard Betrayal'

After being let go from Chelsea for reaching their maximum age limit,Frank LampardÂ surprised everyone by accepting a loan deal with Manchester City.

As if scripted by a Hollywood screenwriter, the former England star made a substitute appearance in a game against his old side to rapturous applause from both sets of fans. He then stunned his former club by scoringÂ a crucial equaliser, but refused to show any kind of glee in what he had done.

This day in the life movie would document Lampard's tormented day and his conflicting inner monologue.

It would be directed by David Lynch, so you wouldn't actually know if the whole thing was just a dream...

Joe Kinnear in 'Joke in Here: A Life on the Toon'

There was once a time when Joe Kinnear was a respected Premier League manager, keeping Wimbledon in the Premier League despite budgetary constraints.

Then, when his friend Mike Ashley reached out, he entered a new chapter of his professional career with Newcastle United.

This movie would be in two parts: The first would uncover the reasons for his baffling appointment as Toon manager in 2008 and re-enact hisÂ famous swear-heavy press conferenceÂ (this film would be an 18).

The second part would pick up in 2013, when he was made director of comedy football and appeared to sign very few players while making a large amount ofÂ hilariously false claims.

These would be light-hearted comedy moviesâ€”although Newcastle fans wouldn't find them too funny.

On January Deadline Day 2013, Peter Odemwingie took it upon himself to drive down from West Bromwich to London to try and hash out a deal with Queens Park Rangers. The player, however,Â was completely unauthorisedÂ and went home without setting foot in QPR's offices.

If no one has bought the movie right to this hilariously bad attempt at career progression, then Hollywood is missing a trick.

Cristiano Ronaldo in 'The Sad'

In September 2012, Cristiano Ronaldo told the media that he hadÂ The Sad. No one knew why he had The Sad, but he did explain that The Sad was due to a "professional situation" at the club.

Was Xabi Alonso stealing his bronzer? Did one of the lights go out around his vanity mirror in the Bernabeu dressing room? Had Pepe dented his Lamborghini during one of his rage blackouts?

We deserve a film that uncovers the truth.

Craig Bellamy hit headlines in 2007 when he allegedly hit Liverpool teammate John Arne RiiseÂ with a golf clubÂ during a team training session in Portugal.

This movie could have a faux-documentary feel likeÂ The Office, with Riise, Bellamy and the rest of the Liverpool gang giving commentary on a recreation of that magical time in Iberia.

On the final day of the 2005-06 season, Tottenham Hotspur faced West Ham United and simply needed to match Arsenal's result against Wigan Athletic to beat their north London rivals' to a Champions League place.

However, the night before the game,Â 10 of the team succumbed to food poisoning at their Docklands hotel. There is surely a need for a movie that looks into "Lasagna-Gate," and whether it was actually a sinisterÂ machiavellian plot from an Arsenal sympathiser.

Also, the film might be able to answer the big question from the scandal: Why were Spurs staying in a hotel for a league game with local London rivals?