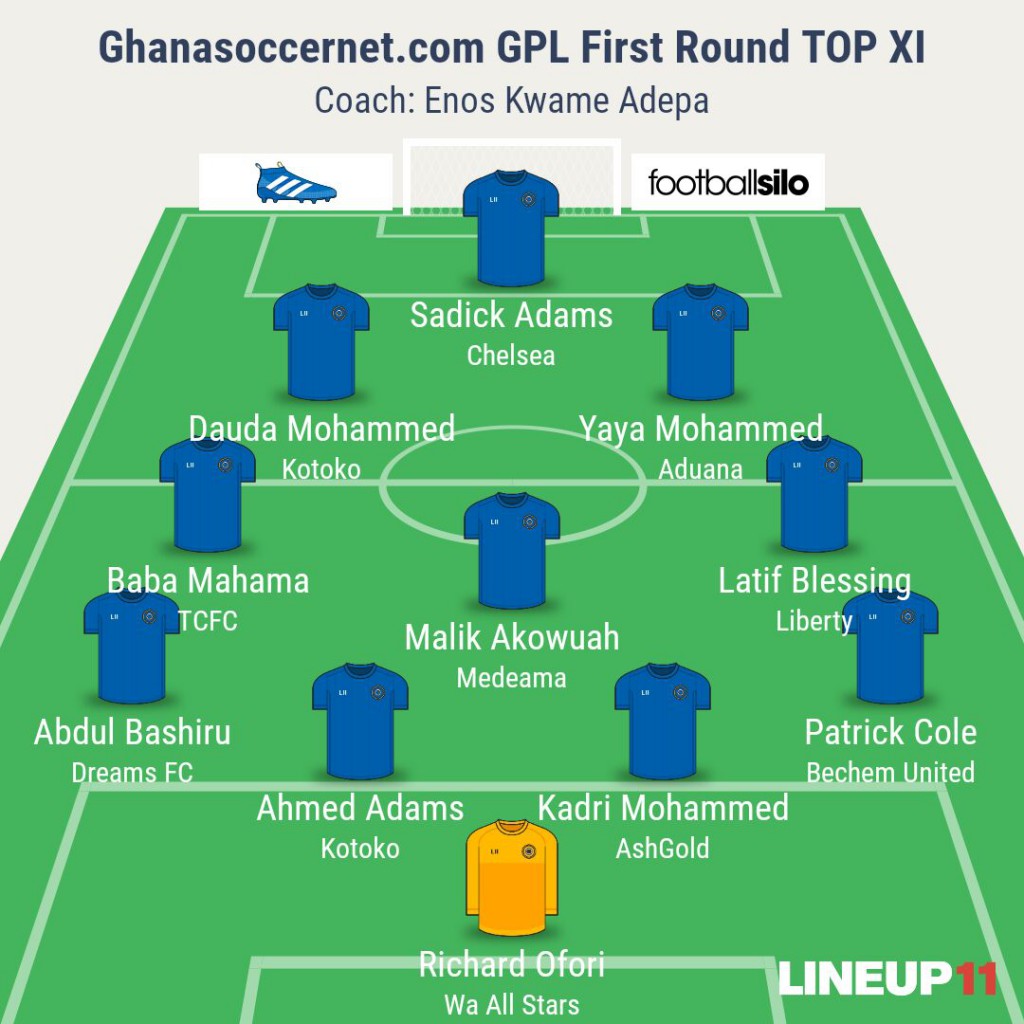 The stupendous performance of both Latif Blessing of Liberty Professionals and Yaya Mohammed has been hugely influential in determining the position of their clubs after the first round of the Ghana Premier League while Dreams FC captain Abdul Bashiru and Bechem United’s Patrick Cole surprisingly made it into the team.

Surprisingly, no Hearts of Oak player made the cut while Kotoko is the only club with two players in the list.

The coach for the first round of the GPL is Enos Kwame Adepa of Wa All Stars while the system adopted for the round is 4:3:2:1

Below is the First Round Top XI

The performance of the Black Stars goalie was second to none in the league as he kept 9 clean sheets out of 13 appearances and emerged Most Valuable Player on three occasions. He had one yellow card.

Cole is an unsung hero whose performance has not been noticed by many followers of the Ghana Premier League. He beat completion from Amos Frimpong, Godfred Saka and Amos Korankye as he played all 15 matches in the first round. He emerged MVP on one occasion and attracted two yellow cards.

As captain of Dreams FC, Abdul Bashiru played 13 matches and won MVP on three occasions. He provided 3 assists and attracted 3 yellow cards. His performance earned him a call-up into the Local Black Stars.

The Asante Kotoko beat close competition from Hearts Robin Gnagne and Liberty’s Samuel Sarfo after playing all 15 matches for the Reds. He emerged MVP on one occasion and capped his performance with a goal. Sarfo played 14 matches without a goal while Gnagne played all 15 matches but could not score as well.

Despite the dwindling fortunes of AshGold, Kadri Mohammed has rose on a number of occasions with splendid performances. He scored a goal and won 3 MVP awards in 13 matches. He attracted 3 yellow cards.

The Medeama SC deputy captain is the most rated defensive midfielder in the GPL in the first round with 2 goals in 11 matches and 2 MVP awards. He attracted 2 yellow cards.

Arguably the best player on the local scene now, the Liberty Professionals forward made all 15 starts for the Dansoman-based side. He won MVP on 6 occasions and scored 9 goals. He made two assists and had no disciplinary issues as he attracted no card.

Baba Mahama is obviously one of the discoveries of the first round as he dazzled defenders and forced applause from fans on a number of occasions. He started all 15 matches and scored 2 goals. He provided two assists and won MVP on 4 occasions.

Saddick emerged the hottest commodity during the transfer market due to his marvelous performance in the first round. He was apt as a captain for the Berekum-based side. He scored 7 goals from 13 starts, provided 2 assists and won MVP on 5 occasions. He attracted 2 yellow cards. His close competitor was Hasaacas’ Eric Bekoe who also scored 7 from 13 matches but Saddick shot ahead with the MVPs he won.

The Kotoko striker’s performance in the first round has been magnificent. He has scored 8 goals in 11 appearances with 2 assists. He won 5 MVPs and attracted 1 yellow card.

Yaya is one of the returnee players who have revitalized the GPL with spirited performances. He is the leading goal scorer with 11 goals out of 13 appearances. He made 3 assists and attracted 2 yellow cards. Surprisingly, Yaya never won any MVP award.