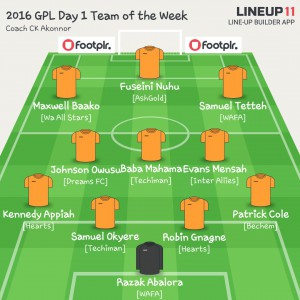 Two players each from WAFA, Techiman City and Accra Hearts of Oak made it into the GHANAsoccernet.com Team of the Week after the opening matches of the 2015/16 Ghana Premier League.

Coach C.K Akonnor was our coach of the week after leading newly promoted Dreams FC to record a lone goal victory over Ebusua Dwarfs at the Robert Mensah Stadium in Cape Coast.

Dwarfs suffered their first home defeat in 732 days after losing to New Edubiase on 20th February 2014.

Below is our Team of the Week: