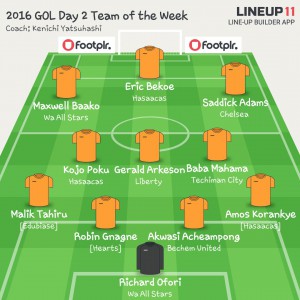 The Ghana Premier League enters the second week and after scintillating and brilliant exchanges, GHANAsoccernet.com brings you the team of the week.

Maxwell Baako of Wa All Stars is the only player who was able to maintain his stay in the team with 10 other players all making their first appearance.

The Team of the Week comes with a 4:3:3 system with Coach Kenichi Yatsuhashi as the coach of the week taking over from CK Akinnor who won it after the opening day matches.

Ofori's agility and steadfastness in post ensured Wa All Stars recorded a shocking win over Aduana Stars at the formidable Nana Agyemang Badu Park. For the second time running, Richard Ofori has kept a clean sheet.

Korankye's thunderous free kick from 45 yards makes him the perfect choice for the right back position. After scoring that early free kick for Hasaacas, Korankye's contribution for Hasaacas was outstanding.

Malik Tahiru was the best left back this week and no wonder he was voted the MVP after Edubiase won by a lone goal over Dwarfs. Malik's surging runs to support the Edubiase attack and aggression in defense for the Bekwai-based side earned him a role in the Team of the Week.

Despite their loss at the Theater of Dreams, Akwasi Acheampong of Bechem United was outstanding in the match. His defensive exploits ensure the visitors did not go home with more than a goal.

For the first time since 1969, Accra Headts of Oak picked a win at Tarkwa despite Medeama SC's home invincibility against the Phobians particularly and the man who guided the defense of the visitors was captain Robin Gnagne. Dupped the Minister of Defense, Gnagne rose to the occasion and stopped both Benjamin Bature and Bernard Ofori from finding the back of the net.

Gerald Arkeson displayed creativity and defensive qualities in the heart of midfield for Liberty Professionals as they recorded a 2-1 victory over Inter Allies.

Despite Inter Allies making ten changes to the side that played Aduana Stars in the opening game, Gerald Arkeson dominated the midfield and guided the Dansoman lads to victory.

Many people may have not realised that the Hasaacas' 4-2 win over Techiman City was masterminded by Kojo Poku. His quick runs and great passing ability made him the toast of the fans as the home side cruised to victory. His skilful display fetched Hasaacas two free kicks which that resulted in their first and third goals.

The talented attacking midfeielder brightened the visiting side especially in the second half with his intelligent moves. Scoring the second goal for Techiman City to give the side hope when they were two goals down was not a fluke. He rekindled the spirit of the visiting side but the fouth goal by Papa Arko made sure the backbone of the vsistors was completely broken. Baba Mahama picked the No.8 spot.

Even though he was not allowed by coach to last the entire duration of the game, Bekoe 30-yard shot that fetched Hasaacas’ third goal was a confirmation of the fact that the lethal striker is back. The ‘Hitter’ many people call him, Bekoe scored his first goal from the spot before that thunderous strike. He is so far the second player to have scored a brace in the league. The great performance of the former Ghana goal king will surely send opposing team thinking.

Saddick Adams did not only score to hand Berekum Chelsea their first home win, he also won the MVP after the game with WAFA. The returnee made his experience and presecnce felt when he carried the Chelsea side on his shoulders to secure the victory. Mention must be made that the former National U17 striker had been earlier award by the Ghana FA for saving the life of a youth team player.

Maxwell Baako is the only player who maintained his position in the team of the week from last week’s squad. The Wa All Stars forward was instrumental in ensruing that they picked all the maximum points at the Nana Agyemang Badu Park in Dormaa against the invincible Aduana Stars.

Baako’s Messi-like dribbles saw the Aduana defense at sixes and sevens on numerous occasions as his major assist to Kofi Yeboah earned Wa All Stars the win in added time.